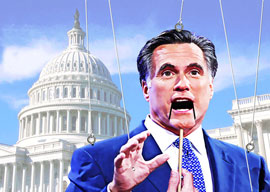 After winning a war of attrition in the primaries, Mitt Romney is the presumptive Republican nominee for president. He is also a presumptive human being.

Whereas Obama is thought to be cool, Romney is widely perceived as cold. He is so utterly bloodless, wooden, and flavorless, he makes the robot from Lost in Space seem like Pagliacci. A tree stump has more personality than he does. Even a square has sharp edges, while his are softly rounded. The only remotely magical thing about him is his Mormon underwear. No, I take that back”he’s a miracle worker in that he makes Bob Dole and Michael Dukakis seem absolutely thrilling.

For the past half-year, I”ve tried to ignore him, deliberately slaloming my consciousness around every mention of him. But from now until November, he will be impossible to avoid, and I”m bracing myself for Neocon Water Torture. Constantly hearing about Romney will feel like being locked into a small, dark room and forced to listen to the sound of snoring as it’s blasted from wall-to-wall Marshall amps.

“His critics insist there is evil lurking behind his plastic mask. I suspect there’s nothing behind it at all.”

Based on the nonstop squalling of the bespectacled and slump-shouldered progressive jellyfish who hate him, I suppose I should like him through the time-tested equation of “the person who irritates the people who irritate me is my friend,” but I can”t even manage a pearl-sized toothpaste squib of positive feeling toward him. The Obamabots depict him as a hateful, rapacious, bloodthirsty, peasant-squashing monster, which errs in making him sound far more exciting than he is. Painting him as “extreme” may backfire, because it implies he actually has a pulse. I find it impossible to summon strong feelings, whether positive or negative, for the ice sculpture that is Mitt Romney. His critics insist there is evil lurking behind his plastic mask. I suspect there’s nothing behind it at all.

You want out of touch? This is a man who tries appealing to a sidewalk full of young Florida blacks by quoting “Who Let the Dogs Out?“ He panders to white voters in the Deep South by calling them “y”all” and saying he had “a biscuit and some cheesy grits“ for breakfast. (They”re called cheese grits, you cheesy dork.) And he probably just lost the state of Pennsylvania by first referring to a hoagie as a “sub.”

Critics on both sides of the eternally tedious left-right continuum accuse him of having no “core,” of being an incurable “flip-flopper,” and of placing expediency before principles. I”m not sure whether that’s true, and I don”t know whether it even matters. Even if he’s full of shit, it’s plastic shit manufactured by Chinese slave labor. But rather than being a Machiavellian politician, he may merely be a politically naÃ¯ve pragmatist. He claims to have “an enormous respect for data, analysis, and debate” and has said that “There are answers in numbers”gold in numbers. Pile the budgets on my desk and let me wallow.”

As someone who respects math and logic more than ideology and emotion, I don”t think it’s necessarily bad to appoint a cold-blooded technocrat to steer this sinking ship. I think many of our current problems are due less to cold-bloodedness than to a half-assed, dim-witted, and misguided sense of compassion. The main problem is that human beings are still in a retarded phase of evolution where emotion continues to trump logic. Most people are more comfortable being herd animals than individuals. They crave leadership more than ability. They favor personality over pragmatism. If given a choice between Buddy Love and the Nutty Professor, they”d choose Buddy Love every time. This does not bode well for Romney.