The Roots of Voter Anger Go Back to 1954 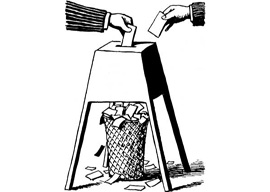 Sixty-nine percent of voters nationwide are angry with the policies of the federal government.

To understand why, it’s important to remember that most voters believe tax cuts and government spending cuts are good for the economy. Collectively, voters have voted for politicians who promised spending cuts and tax cuts in just about every election over the past four decades.

Barack Obama promised tax cuts for 95 percent of all Americans. George W. Bush’s across-the-board tax cuts were the centerpiece of his domestic policy. Bill Clinton promised tax cuts for the middle class. The first President Bush asked the nation to read his lips while promising no new taxes. And Ronald Reagan rode the tax revolt to the White House. Jimmy Carter ran as a fiscal conservative, and Richard Nixon was more fiscally conservative than Hubert Humphrey.

“So this long-lasting spending spree was enabled on a completely bipartisan basis.”

Despite that track record and clear expression of voter preferences, total government spending has gone up in America every single year since Bill Haley was topping the charts with “Rock Around the Clock,” a young singer named Elvis Presley made his first commercial recording, and Hank Aaron hit his first home run as a rookie for the Milwaukee Braves. That was way back in 1954, with Dwight Eisenhower in the White House.

With those numbers in mind, some cynics might assume that government spending has grown over the past 55 years just to keep pace with inflation. Others might point out that there are a lot more Americans for government to serve today than there were back in 1954.