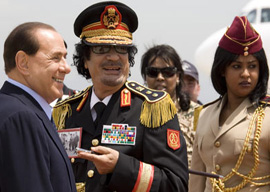 Macbeth knew what would be coming to him once his domestic enemies had the upper hand. He decided to go down fighting.

I will not yield,
To kiss the ground before young Malcolm’s feet,
And to be baited with the rabble’s curse.

The Roman dictator Sejanus was not given that opportunity. Sejanus had taken power in Rome when Tiberius, the official emperor, decided that playing with his tiddlers in Capri was more fun than ruling. Sejanus overreached, Tiberius sent a letter to the Senate, and Ben Jonson tells the rest:

Terentius:
Sentence by the senate,
To lose his head; which was no sooner off,
But that and the unfortunate trunk were seized
By the rude multitude; who not content
With what the forward justice of the state
Officiously had done, with violent rage
Have rent it limb from limb.…
These mounting at his head, these at his face,
These digging out his eyes, those with his brains
Sprinkling themselves, their houses and their friends;
Others are met, have ravish’d thence an arm,
And deal small pieces of the flesh for favours;
These with a thigh, this hath cut off his hands,
And this his feet; these fingers and these toes;
That hath his liver, he his heart.…

Muammar Gaddafi was not dealt with quite as sternly as that, though we have learned that among other indignities, he was sodomized with either a stick or a knife following his capture last Thursday. (I can hear a thousand comedians in the lower kind of British clubs saying, “I’ll be buggered if I’ll let them make me president of Libya!”)

“To openly gloat and cackle at the news of our soothed chieftain being abused at both ends, then dispatched by a ululating mob of savages, is coarse and ignoble beyond my understanding.”

On a straightforward individual calculus of harm done versus harm received, Gaddafi got off lightly. The number of people who have died screaming in pain on his explicit instructions has at least four digits and very likely five. That’s busy work in a nation of six and a half million, even when spread over forty-two years. A beating, a humiliation, a baiting with the rabble’s curse, and an uninvited stick up the poop chute are nothing by comparison.

I have been shocked by the reaction from some of my conservative friends. They are exultant. Gaddafi, they are telling me, was a very bad man. That is true. The world, they are telling me, is well rid of him. That may be true, if what follows Gaddafi is an improvement, but this is still uncertain. How, they are asking me, could I have wished for the continued rule of a man with so much blood on his hands?

That last one’s easy: If Gaddafi showed decent respect for US national interests, I couldn’t care less if he took his morning shower in the blood of virgins he had slaughtered for the purpose. Foreign-policy-wise, I am out at the far realist end of the moralist-realist spectrum—a Disraeli among Gladstones.