The Salesman Who Sold Out His Country 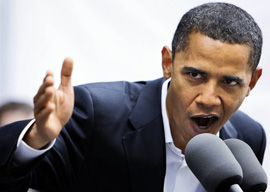 On the campaign trail in 2008, Barack Obama was charismatic and sold himself well. Unfortunately, he also sold out his country.

In modern political history there has scarcely been a politician who promises so many things, then does precisely the opposite. I agree with everything Obama says and nothing he does.

Obama is the man everyone hopes to hear on the campaign trail and the man everyone should hope to never see reelected. Obama could not be more correct in his astute assessments that our foreign wars are a blight, our courts are a dictatorial disgrace, and our economic system is in mortal peril.

In spite of candidate Obama’s call for a speedy end to our military conflicts in the name of a “War on Terror,” President Obama often expanded them. Everything from drones in the air to boots on the ground was increased. When Obama entered office there were 140,000 troops in Iraq, and for half of his term this remained roughly the same. In Afghanistan he increased the number of troops from 30,000 to almost 100,000. There are also ominous reports of increases in other Middle Eastern countries. There are proxy wars in Libya and Pakistan. And there’s the continuation of AFRICOM.

“In modern political history there has scarcely been a politician who promises so many things, then does precisely the opposite. I agree with everything Obama says and nothing he does.”

In the wake of Supreme Court hearings regarding healthcare, Obama chastised the judges and seemed to imply they had no power to overturn Congressional legislation. Legal sycophants corrected the president that ever since Marbury v. Madison, the court has assumed this privilege.

Being an old Jacksonian myself, I agree wholeheartedly with the president. Early on in our republic, the Supreme Court was viewed as the weak sister of governmental branches. Judicial review and the invalidation of democratic legislation soon altered everything.

Our unelected and largely unaccountable judiciary is an appointment-for-life autocracy. When Obama suggests the court has no authentic power to nullify the popular will, I generally concur. Some Founders similarly understood the judiciary’s function to be largely advisory. But it is difficult to reconcile legislative authority with a defiant judiciary.

Obama doesn”t seem to seriously hold to the view that the Supreme Court’s monstrous usurpations should be curtailed. Such a hydra would likely engage a president’s entire term to grapple and overcome. Like the child with its shiny toy, Obama seems unconcerned about questions of independence and authoritarianism, law and reality, or simple right and wrong. He merely wants to play with what someone has taken away from him.

Anyone who does not believe a nation with wealth disparity that rivals ancient Rome’s is heading for disaster does not read their history. Everywhere we farm out labor to serfs foreign or domestic in the pursuit of less expensive goods. While this serves our consumer society’s instant gratification, it betrays the Prozac Nation of manic depressives we have become.