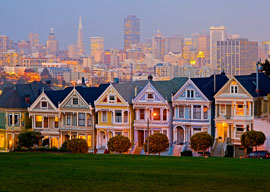 The city of San Francisco has become a notoriously unaffordable place to live. Two-bedroom apartments in San Francisco currently average $4,126 per month, up from $1,840 in 2009. To buy a three-bedroom home would run you $1,612,500.

With San Francisco being one of the epicenters of the environmental movement of the past half century, local homeowners are adept at using progressive verbiage for justifying keeping San Francisco in stasis. As a conservative, I rather admire the cleverness with which liberals have contrived to keep San Francisco physically looking much like it did in the past.

The situation has gotten so bad for young renters that San Francisco now even numbers among its myriad activist groups a pro-capitalist one”the Bay Area Renters Federation, or BARF“that proposes that developers be allowed to develop.

This is part of an increasing national push to allow more construction in already dense big cities. That’s probably a good idea, but it’s worth explaining in honest language what’s actually going on in San Francisco. Normally, much of the debate over real estate policy in San Francisco, which voted for Obama over Romney by an 84″13 margin, is conducted in the intentionally obscurantist antiwhite rhetoric of our times, with frequent denunciations of “bros.”

“Even if liberal San Franciscans won”t talk about it, their policies have been methodically effective at pushing out poor blacks.”

Of course, most of the people denouncing other people for being white and wanting to live in San Francisco are white San Franciscans themselves.

Paradoxically, under its current antidevelopment ideology, San Francisco”like Washington, D.C., and Brooklyn, and unlike almost all the rest of the country”is becoming more white. In 1990, young people in San Francisco were only 22 percent white, but by 2014 they were up to 33 percent white. And the future looks even whiter. KQED reported last year:

By 2040, San Francisco County is projected to have a non-Hispanic white majority”jumping from 42 percent in 2013 to 52 percent in 25 years. The percentage of Asians is expected to fall from 34 percent to 28 percent. The Latino population is forecast to shrink from 15 percent to 12 percent. The city’s dwindling number of African-Americans, currently down to 6 percent, should remain the same.

That last projection sounds dubious, like a political concession to not alarm the most volatile ethnicity.

Granted, San Francisco real estate was always costly, due to its scenic 47 square miles being bordered on three sides by salt water. In this century, however, the evolution of nearby Silicon Valley away from technology and toward marketing has lured the start-up industry, such as Twitter, north from its traditional home in the Santa Clara County suburbs (engineers like to have their own garages and backyards) to The City (marketers and media people like apartments if they are close to chic restaurants).

If you look far enough back into the past, you”ll find the Northern California establishment entertaining hyper-ambitious civil engineering proposals to increase the population carrying capacity, such as the Reber Plan to fill in much of San Francisco Bay. But then the wife of UC Berkeley chancellor Clark Kerr noticed that she liked her view of the Bay just fine the way it was and didn”t see how it would make her and her friends better off to make the Bay habitable. So she started the Save the Bay organization.

Today, such grandiose plans are almost inconceivable. But what about simply putting up more apartment buildings? I could put the city fathers (do they still use such a cis-heteronormative term in San Francisco?) in touch with my cousins, who have been in the real estate development business in San Francisco since the 1970s.

What I”ve learned at family reunions is that real estate development in San Francisco is a career for the patient. My cousins will buy a property and then set about getting the multitudinous permissions necessary to build on it. With luck, maybe within a decade they”ll have all their ducks in a row to begin construction, having finally reached agreements with current tenants, government agencies, neighbors, historical preservation societies, civil rights organizations, gay rights activists, and all the other innumerable “stakeholders.”

Now, you may be thinking that this sounds extremely anti-capitalist. But my capitalist cousins have done pretty well for themselves because the labyrinthine local regulations impede their competitors as well, so the price they eventually get from their customers is high.

What about current homeowners? What’s in it for them in restricting new construction?

First, there are the direct annoyances of new construction on old neighbors: noise, traffic, shadows, neighbors looking down on them, and so forth.

Second, the lower the supply of housing, the higher the price of existing homes. Many San Franciscans have become multimillionaires just by living in their own homes.