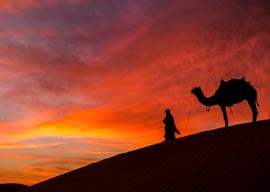 As everyone knows, when you cross a camel with a mule, you get a Saudi ruling family member. A camel crossed with a snake produces a Qatari ruler, and finally, a camel having made whoopee with a pig conceives a Kuwaiti sultan. Mind you, I”m being a bit rough on these animals, which are, after all, also God’s creatures. And I do mean the camels, mules, snakes, and pigs. The great mystery, of course, is how do these feudal mobsters get away with it? Take, for example, just a little case of rape of two Nepalese maids by a Saudi “diplomat” in India that emerged only a few weeks ago. The Saudi repeatedly raped, assaulted, starved, and held hostage the two women who worked as housemaids in his house on the outskirts of Delhi. This went on for months, until the two women managed to escape and report the rapes and beatings to the Indian authorities. The pig, and again I apologize to our porcine friends, did not even bother to deny the charges, but simply claimed diplomatic immunity and that was that. The rapist was eventually withdrawn by the Saudis, and will most likely be posted to a friendlier country, where women are not considered human beings, perhaps Qatar, Kuwait, or some other Gulf state

“Hell itself is defiled by the foulness of the Saudi rulers. Uncle Sam should be ashamed of himself for kissing their ass.”

And as no one can forget, 16 of the 9/11 hijackers were Saudis, and the first act by the Bush-Cheney gang was to ensure all Saudi “royals” were flown out safely back to their desert craphole and far away from any Congressional committee asking embarrassing questions. What intrigues me is, how in hell do these monsters get away with it? Well, for some of us it’s an easy one: They bribe their way out. Yes, but so did Al Capone until the IRS nailed him, and Al’s crimes were child’s play compared with what the Gulf gangsters have inflicted on us. Let’s not forget that ISIS is a Saudi-Qatari invention, both kleptocracies having produced the financing for the Sunni “rebellion” once that foolish American proconsul had done away with Saddam’s officer corps. The Saudis now claim that they no longer finance ISIS, but they would, wouldn”t they? Qatar does not even bother to lie. The hundreds of thousands of dead, the more than 5 million refugees, and the total catastrophe that is the Middle East today can be traced back to Saudi and Qatari blood money ensuring peace at home at the expense of others. Iran is to the Saudis what Uncle Sam is to Iran: the Great Satan. And since day one after the fall of the Shah, Saudi money has been working inside the Beltway to make sure Iran remains America’s No. 1 enemy. Saudi corruption of the American process at times equals that of AIPAC, and then some. Israel does it with boycotts and threats, the Saudis with cold hard cash. (Incidentally, Israel and Saudi are as close as Elton John and David Furnish, but unlike the latter, the former pretend to have a frosty relationship.)

So how is it possible that on one hand Saudi and Gulf money pays for the thousands of schools throughout the Muslim world that teach anti-Americanism, and on the other the Pentagon recently approved the sale of 600 Patriot defense missiles, not to mention thousands of precision-guided munitions to replenish stocks exhausted by the Yemen campaign, as big a war crime as we”ve had so far? The Saudi war machine has been heroic, killing mostly civilians and bombing hospitals and schools. In reality, the Saudis would lose against Monte Carlo, which only boasts of a police force, but they justify a war against Yemen by having conjured an Iranian role in the conflict. After months of bombing and strangling their neighbor, they still have nothing to show for it. The son of the ruler has, however, had great fun in ordering air strikes and tank charges against women and children, and at times sees himself as a reincarnation of George Patton, but that’s another story altogether.

In a speech in Dallas a few years ago, Tom Fleming said that there is no democracy in America, just special interests. How right he was. If we had democracy, the Saudi gang would have been thrown out on their ear long before necessary rulers like Saddam and Qaddafi. (Look at the horrors that followed their demises and weep for S & Q.) Riyadh has exported and financed more terror than Tehran, Baghdad, Damascus, and Tripoli put together, and has been doing it since that arch phony FDR first discovered the child-molesting Ibn Saud emerging from the desert covered in black gold. They”ve been sitting pretty ever since, and American feminists seem to ignore their outrages against women. Even in Africa, where cultural oppression of females is a sine qua non, women have been known to protest for their rights. Not in Saudi, where they would be punished immediately. Yet Western feminist activists never mention it. Obama recently licked the foul-smelling sandals of the Saudi ruler, the Saudi rulers being the equivalent of Homo naledi, the prehistoric humanoid recently discovered in a South African cave. Hell itself is defiled by the foulness of the Saudi rulers. Uncle Sam should be ashamed of himself for kissing their ass.

As I was writing this, 800-plus visitors were trampled to death in Mecca. The rulers denied any responsibility. So what else is new?