The Scientist vs. the SPLC 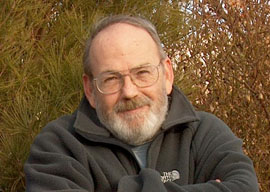 The dumbing down of the establishment left is amusingly illustrated by how the Southern Poverty Law Center, America’s most lucrative hate group, put the great scientist Henry Harpending (1944″2016) on their “Extremist Info“ blacklist as a “White Nationalist” on the grounds that

Henry Harpending is a controversial anthropologist at the University of Utah who studies human evolution and, in his words, “genetic diversity within and between human populations.”

(Do you ever get the feeling that SPLC staffers are just going through the motions for the money, or perhaps even intentionally trolling their own racket?)

Henry, who died over the weekend, was the rare college professor whose career justified the concept of tenure. The holder of a chair at the U. of Utah in anthropology, the subject perhaps most emasculated by political correctness, he enjoyed a double-sided career as a cultural researcher in the field and as a quantitative genetic theorist at the whiteboard.

These days it’s hard to remember that in the mid”20th century anthropology was a subject of considerable glamour, with its two competing wings of physical/genetic anthropology (as exemplified by Francis Galton) and cultural anthropology (Franz Boas) both adding to its prestige. The Darwinians (such as Carleton Coon) argued in favor of nature and the Boasians (such as Margaret Mead) in favor of nurture, and there’s nothing much more interesting to debate.

The “60s, however, proved disastrous to anthropology, as the left grew increasingly hysterical, seeing a balanced perspective giving weight to both nurture and nature as concomitant to Hitlerism. At Stanford, eventually, the war within the anthropology department grew so heated that provost Condi Rice resorted to splitting the baby into two departments: anthropological sciences versus cultural and social anthropology, which seemed more a branch of postmodern literary criticism.

“One of Harpending’s most interesting mathematical solutions was calculating just how much individuals of different racial groups differ.”

Not surprisingly, as noticing the broad patterns of similarity and difference among humans increasingly required career-endangering courage, the public lost interest in anthropology.

And yet the study of man couldn”t help but attract some of the most adventurous intellects. Harpending, a country boy from the northern Appalachians, spent close to four years in Africa living with tribes of hunting Bushmen and herding Herero.

Henry fell in love with Africa. He seriously considered leaving academia to take up being a Great White Hunter safari guide so he could stay in Africa.

Famous anthropologists tend to elicit or impress their own personalities upon their subject tribes in a sort of Heisenbergian process. Mead, for example, reported back that Samoan teenagers were sexually adventurous, rather like herself, while the macho Napoleon Chagnon found that the Yanomami of South America were as fierce as he was.

In Henry’s accounts, the Bushmen and Herero of the Kalahari Desert tended to be, as he was, cheerful, witty, insightful, and brave.

But they were also, he pointed out, quite different, a perception that cultural anthropologists were increasingly unwilling to recognize.

The small, yellow-brown Bushmen, hunters who mated more or less for life and put much effort into feeding their nuclear families, reminded Henry of his upstate New York neighbors. If fathers didn”t work, their children would go hungry.

In contrast, the Bantu Herero (distant relatives of American blacks) were full of surprises. In general, black African men seemed less concerned with bringing home the bacon to provision their children than did Bushmen dads.

In black African farming cultures, women do most of the work because agriculture involves light weeding with hoes rather than heavy plowing. Men are less expected to contribute functionally to their children’s upkeep, but are expected to be sexy.

Among the herding Herero, though, the men labored like American cowboys (but to support their mothers, sisters, and nieces rather than their wives and children), while the women gossiped, schemed, and slept around. Henry noted:

My own cynical perspective on it is that the Herero are a nearly perfect 1970s feminist version of Stepford Wives with the sexes reversed. The women pull all the strings and pursue their own interests while the men are droids run by the women, occupied mostly with mumbo-jumbo like witchcraft and the ancestor cult.

What Africans call “witch doctors,” anthropologists now call “traditional healers,” which is rather missing the point about the purpose of the dark arts. As Henry observed, “… semantic cleansing has led to the loss of a lot of knowledge about human cultural diversity.”

On his West Hunter blog, Henry observed how the most distinctively African aspect of the widespread belief in witchcraft is that a rival can project malevolent forces vast distances against you without his even consciously willing it:

A colleague pointed out a few weeks ago, after hearing this story, that if [a belief in witchcraft] is nearly pan-African then perhaps some of it came to the New World. Prominent and not so prominent talkers from the American Black population come out with similar theories of vague and invisible forces that are oppressing people, like “institutional racism” and “white privilege.”

Ta-Nehisi Coates should be proud of how deeply African his style of thinking is.

This Bushmen vs. Herero illustration of the plasticity of human behavior would likely have delighted Boas. But such insights are much too interesting for contemporary cultural anthropologists, since they are only interested in blaming whites, and men, and white men.

In 1999, I started an email group to discuss human biodiversity. Fortuitously, my project happened to bring Henry into contact for the first time with the physicist Gregory Cochran, who had developed an interest in applying and extending evolutionary theory. Together, they went on to set off sparks that might someday be recognized as the leading intellectual development of the early 21st century.

Their overarching breakthrough was the realization that the rapid development of human culture since the invention of agriculture roughly 10,000 years ago doesn”t mean that Darwinian evolution slowed down, as was nearly universally assumed in the late 20th century. Instead, the development of new and different cultural pressures on different continents implied that selection must have sped up, increasing the biodiversity of humanity.