The Scoop on Looper 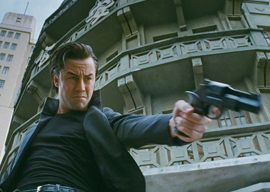 Rian Johnson’s critically acclaimed Looper, starring Joseph Gordon-Levitt and Bruce Willis as young and old versions of the same time-traveling assassin, asks the question: If you owned a newly invented time machine in 2074, what would you do with it?

Drop all those wacky ideas of making a fortune betting on Super Bowls, as Biff did in Back to the Future Part II. That’s crazy talk. No, the only sensible thing would be to kidnap people you want dead, stuff them in your time machine alive, and zap them back to Kansas City in 2044 to be rubbed out by your hired hit men of the past. You see, by 2074, forensic science has advanced so much that you can”t get away with murder. (You can get away with kidnapping, apparently.)

This sounds pretty stupid, but Johnson is a bright enough writer-director”as he showed in Brick, his amazingly stylized 2005 indie debut with Gordon-Levitt as a teen private eye”that he can do much that’s interesting even with this dire-sounding sci-fi premise.

When I was a small boy, I was obsessed with the bright shining future awaiting us in the Space Age. I felt jealous of a friend’s little sister because she would grow up two years further into the future. I especially looked forward to the year 1966 because the numbers “1966″ were so much more streamlined and modern than the less aerodynamic “1965.”

Connected somehow with my neophilia was my feeling that it would be neat to be a little bit Japanese-looking, which struck me as boyishly futuristic. Unbeknownst to me at the time, Japanese manga and anime artists going back to Astro Boy and Speed Racer shared this view, presenting heroes who looked about three-fourths white and one-fourth Japanese.

The subsequent success in science fiction of Keanu Reeves (the Bill & Ted time-travel comedies and The Matrix) and now Joseph Gordon-Levitt (the youngest alien in the 1990s TV sitcom 3rd Rock from the Sun and Leonardo DiCaprio’s right-hand man in Inception) suggests that at some level of consciousness, other sci-fi fans share my old prejudice.

The slightly Asian-appearing Gordon-Levitt himself insists that he is purely Jewish. He does not appreciate people on the Internet conjecturing baselessly about his Nana and, say, her Japanese gardener.

“If you owned a newly invented time machine in 2074, what would you do with it?”

But that doesn”t stop Gordon-Levitt’s fans from asking. He scores an 89 on Google Ethnicdar. In other words, when you type in “Joseph Gordon-Levitt” on Google, the third autocomplete term is “ethnicity.”

Casting Gordon-Levitt and Willis to play the same character separated by 30 years in age poses obvious problems (e.g., preposterousness). But Looper‘s auteur was set on Gordon-Levitt, who had delivered a memorable performance as an underage Philip Marlowe for him in Brick, Johnson’s high-concept high-wire film noir set in a suburban high school.

Rather than cast Reeves as the elder version of Gordon-Levitt, Johnson jumped at signing Willis and then counted on Gordon-Levitt to put up with three hours of prosthetic makeup per day.

The eager younger actor wound up looking less like a human being than like a graphic novel character. The fakery cuts down on the expressiveness of Gordon-Levitt’s face, but since he’s playing a professional murderer inured to feeling, it doesn”t much get in the way.

Yet what’s the point? Why not just have Bruce Willis explain that when he decided to get out of organized crime, he had a lot of plastic surgery so his enemies wouldn”t recognize him anymore?

Although Looper is being advertised as science fiction, the comic-bookish mug painted on Gordon-Levitt suggests that it’s really more of a superhero origins story set in a superhero universe that Johnson made up.

Sci-fi is gadget-driven storytelling for engineering minds. Assume somebody has a time machine”what’s the first thing he”d do with it? (In sci-fi, you are supposed to act like you care about opportunity costs.)

By contrast, in the comic-book genre any chain of cause and effect is good enough. Comic-book movies are identity-driven. Not everybody thinks like an engineer, but everybody has an identity. Assume you have a time machine”that would be awesome!

And everybody is interested in personalities. Assume Bruce Willis has a time machine”he”d be badass! Yet at the same time, Bruce would be sad about his badassery. (That’s why he’s a movie star.)