The Scourge of Sports 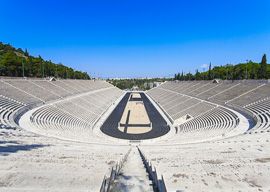 GSTAAD—Purity in a sport does not mix with popularity, and defending the former is anathema to the hucksters, crooks, and profiteers who encourage the latter. In this I do not include the sportswriters of serious newspapers, with whom I sympathize. They see what’s going on, but they have to report on sports and there are libel laws to protect the guilty.

In the birthplace of sports—where else but Greece?—football is as rotten as anywhere on Earth, except in places such as Thailand, where betting comes first and sports second. When my father “owned” a premier division team during the early 1970s the club’s various agents and advisers skimmed millions off him by bringing in South American “Greeks” to be sold to the club. The law back then allowed only two foreigners per team, so the rest had to find Greek roots, an easy enough task for the crooked agents peddling them to dear old innocent dad. Some had Greek-sounding names, such as the Mexican Fanis. Others had to invent Greek grandmothers, such as the Argentine Nestor Martin Errea. Most of them were incapable of kicking a soccer ball, and some even had trouble running in a straight line. But the experts deemed them on a par with Pelé, and father paid.

“Football now is as corrupt as gambling, and maybe soon we’ll see the latter becoming an Olympic sport.”

Football now is as corrupt as gambling, and maybe soon we’ll see the latter becoming an Olympic sport. Greek referees in my time were easily and often bribed. Refs and players are still being bribed in most parts of the world, even in Europe, although here only in lower divisions. For a determined gambler, poor referees and players are easy prey. The Internet and global information networks make it easy as pie, as they say in Kansas.

At the 1964 Summer Games in Tokyo, judo was introduced as an Olympic sport. Judo and its siblings kendo and karate had been banned by Allied administrators for a few years following World War II, but all was forgiven in time for the ’64 Games—which was incidentally the first year I strapped on a white belt and went at it like gangbusters. Kendo was featured as a demonstration sport, but karate did not make the cut (too violent back then). It was a traumatic year for the Japanese, as the great Dutch giant Anton Geesink won the heavyweight title, although the other Nipponese fighters had swept the boards. I have never heard of anyone, honest or crooked, ever betting on a judo contest. The sport, as it’s now called, is as pure as synchronized swimming, although I’d much rather wrestle with the swimmers than the beasts I have to embrace at times.