The Scum at the Surface of the Black Lagoon 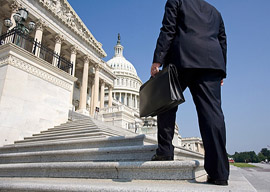 Most sensible Americans agree that foreign lobbyists are a pox on the nation, but few realize how egregious the process has become. American citizens should be able to band together to lobby Congress for their interests, but not foreign agents without proper supervision by law enforcement.

The Foreign Agents Registration Act (FARA) was passed in 1938 to keep track of the no-good foreign skunks who attempt to subvert the American people’s will in favor of a foreign power. Everyone agrees that politicians should only be bribed by US citizens; otherwise, the “lobbying” should be called “espionage.” Everyone agrees, it seems, except for the politicians.

Modern politicians hate FARA, which was defanged in 1966. Nobody has been successfully prosecuted under the Act since then. By 1995 with the passage of the Lobbying Disclosure Act, it became legal for foreigners to directly lobby a congressman so long as they tell everybody about it. Prior to 1966, foreign agents were not even allowed to disseminate propaganda aimed at changing government policy. After 1995, foreigners can disseminate all the propaganda they like without any government oversight. Foreign lobbyists are still legally obligated to register with the Justice Department, but it wasn’t until 2007 that information on them was made public on the Internet. Prior to that, reporters had to pay hefty fees to examine the information in a room in DC.

You still can’t search on a government website to find out which dirty foreigner is currently greasing your congressman. The data was presented on FARA’s website in scanned form and was not searchable until 2009, when the Sunlight Foundation and ProPublica made it available in searchable form.

“Most sensible Americans agree that foreign lobbyists are a pox on the nation, but few realize how egregious the process has become.”

More alarmingly, another site says the Republic of Georgia spent over $5 million on lobbying since 2002. McCain’s foreign policy advisor received some of this money, which probably accounts for some of the old coot’s truculence toward Russia.

Our friends the Israelis? The State of Israel spent $1,439,104.42 on various lobbyists. The World Zionist Organization, registered foreign agents of Israel, spent a whopping $14,770,796 over the same time frame.

What’s left out of the database is more interesting. The Pakistani government’s total FARA-registered lobbying outlays were listed as above $4 million in the period covered by the foreign lobbying website. The Kashmiri American Council has been lobbying in the interests of Pakistan’s intelligence services since 1990 and has dumped an additional few million dollars into the pot. While this has escaped wide notice, a few young mainstream conservatives are livid. I’m assuming the older ones are worried someone will notice certain embarrassing historical parallels.

Think I’m being unfair to mainstream conservatives? Perhaps you’ve never heard of Mujahedin-e Khalq (MEK). The MEK is a terrorist group in Iran and Iraq. The State Department has declared them terrorists, making all commerce with them highly illegal. The MEK are radical Shiites who run their organization like a cult, and just to keep it interesting, they are also feminist Marxists. They were involved in 1979’s takeover of the US Embassy in Iran. They have killed several US citizens. They have shelled and assassinated many innocent Iranians, before and after the Ayatollahs took over. They torture their own members and people they don’t like. They were muscle for Saddam Hussein; he used them to suppress 1991’s Kurdish uprising. When we disarmed MEK in Iraq in 2003, they had a stash of 2,139 tanks as well as armored personnel carriers, rocket launchers, and artillery pieces Saddam Hussein had supplied. No sane American should be involved with the MEK, except to ascertain how many bullets it takes to kill them.