The Secret of Eternal Youth 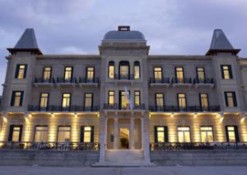 Spetses. I was filled with unbearable nostalgia. There I was again, boating, swimming, sunning, wine drinking with good friends, feeling the ecstasy that only a Mediterranean afternoon can arouse in me. Transforming one’s feelings into language is difficult. One has to avoid sounding corny. Byron wrote about the Isles of Greece, and the sea that murmurs softly to “Come again, and again.” I, too, have heard such voices, mostly when very young, swimming off my father’s boat, checking out the girls lolling on the beaches. The Med’s a drug hard to give up.

Later, by now quite drunk, I floated around Bushido, all in black, its 90-foot plus masts gently rocking in the swell. Where did all those years go, I asked myself. It seemed like yesterday I began sailing around the isles looking for excitement and romance. Alas, it’s all rear view mirror stuff from now on, but not quite yet. Having spent the last forty years charting the slow decline of Western Civilization, I’ve now come to the conclusion that the secret of eternal youth is arrested development. It sure stayed arrested last week off the island of Spetses, where a Greek royal wedding took place and where the poor little Greek boy had the time of his life.

Prince Nikolaos of Greece married the hyperborean beauty Tatiana Blatnik, as good looking a couple as any that were ever described by, say, F. Scott Fitzgerald in his novels about the young and the beautiful. Watching them come down the clusters of white-washed houses lined by cherry and pine trees on a balmy late afternoon my thoughts raced to…Ayn Rand. Ms. Rand had something against ugly people. She thought them evil. (I wonder what she was doing hanging around with Alan Greenspan, the architect of the credit crunch, but I guess it was for the money.) Her heroes, by contrast, were flawless and beautiful. Nikolaos and Tatiana would have been megastars in her books. In an age of cheap celebrity culture, with its Gadarene lust for fame and attention, of gel-haired thugs, foul-mouthed, Concorde-nosed women and tattooed, beer-bellied slobs, the bride and groom stood out like—well, for lack of a more inspired simile—a couple of Orthodox rabbis in a Nuremberg rally.

“King Constantine’s speech was unsurpassed in expressing his love for his son and his country and its people without being awkward in the least. So much so I got up and told him so and he thanked me and put his arm around me.”

I flew from Gstaad on my friends Peter and Lara Livanos’s plane, along with six children and Jeffrey and Lulu Moore. Staying with me on board were Leopold and Debbie Bismarck and Tim and Ginny Hoare. We hit the ground running, which perhaps was a mistake. We stayed up until dawn, were unable to sleep, and blamed it on the full moon. I sweated out the booze in the afternoon and made it to the outdoor cocktail party at the grand Poseidonia hotel in Spetses. Europe’s royal houses were there in spades. The Queens of Spain, Denmark and of course Greece, Crown Prince Felipe and the Infantas of Spain, the Crown Prince and Princess of the Netherlands, (I chatted up Maxima and she was delightful, as was the Crown Princess of Spain, Letizia) and it occurred to me that whenever one reads about royal feuds in the press there is only one thing to do. Ignore it. I saw soi disant feuding princes and princesses having the time of their lives sitting together in dawn bull sessions. We wound up the evening after a dinner in Dino Goulandris’s magnificent property high above a cliff across Spetses. Then the party continued on board Bushido.

Next day was the wedding but first came the hangover to end all hangovers. Mind you, all bad feelings disappeared once the ceremony began. Glowing warmly in the late afternoon sun against a blue sky, the purple bougainvillea encircling the white-washed church, the scene was of such beauty it would have brought tears to the eyes of a true romantic. Like my friend John Sutin, whose wife lies paralyzed and can only move her eyes after falling off her horse. I went with John to the party following the ceremony. It was still twilight and twilights last longer during royal weddings. In a tent next to a long white sand beach, totally deserted in a long shallow cove between two rocky points, a band had begun to play. We were around 400, give or take a hundred. That is all I remember.

Except for being seated at the Greek Queen’s table and talking with Lita Livanos. And King Constantine’s speech which was unsurpassed in expressing his love for his son and his country and its people without being awkward in the least. So much so I got up and told him so and he thanked me and put his arm around me. Many of us were very moved. When I saw the king speaking to a prominent Cretan, I remembered that 69 years before, Constantine and his sister Sophia, the Queen of Spain, were in Crete both suffering from the onslaught of Cretan bedbugs. They were two and one years of age. The royal family was retreating from the German invasion, which came days later. The battle of Crete was fought ferociously and heroically by both sides, German and Greek-British. That is where the three von Blucher brothers, Wolfgang, 24, Leberecht, 19, and Hans-Joachim, 17, all died fighting the Black Watch.  Thinking of the waste of young lives made me sad, but then I spotted various royal ladies and sweet young things who with graceful subterfuge refused to dance. It fell on poor Ginny Hoare and I danced with her until she dropped.

The dawn found me fully dressed asleep on deck of Bushido. A reminder of the impermanence of youth, but oh, what a beautiful three days and nights.