The Secular Fatwa on Julian Assange 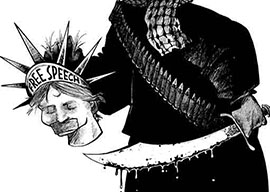 In February 1989, Ayatollah Khomeini issued a fatwa inciting the faithful to murder author Salman Rushdie for blasphemy. Within a few days, professional writers convened in London, New York, and elsewhere to discuss countering this threat. In London, we met at the National Union of Journalists” offices in Gray’s Inn Road. We had fierce arguments about how to best defend not only Rushdie, but our own right to publish without being sentenced to death. Our immediate concern was to protect Salman and his collaborators on The Satanic Verses, primarily his publishers, translators, and agents.

We published a letter signed by writers from all over the world in defense of free expression. Anthony Barnett and I had been assigned to word our first draft so that Muslim writers would sign with us. The resulting letter was published in newspapers worldwide a few days later, signed by thousands of writers that included Muslims, Jews, Christians, Hindus, agnostics, and atheists. It did not save the life of Rushdie’s Japanese translator, nor did it save his Italian translator from being beaten and stabbed, but it demonstrated that scribblers from all parts of the globe would not be cowed by religious edict.

Unfortunately, our resistance to that fatwa did not set much of a precedent. The recent incitements to murder Julian Assange emanating from politicians, journalists, and pundits constitute a new secular fatwa that threatens our freedom to disseminate information. The incitements even crossed into normally quiescent Canada, where former prime ministerial advisor Tom Flanagan demanded that Assange “should be assassinated” and that Obama “should put out a contract and maybe use a drone” to kill him. (Flanagan was born in America, which may explain in part his un-Canadian bloodlust.) “Why was he not pursued with the same urgency we pursue al-Qaeda and Taliban leaders?” asked Sarah Palin. (If the U.S. pursues him as it has Osama bin Laden, Assange is safe for years to come.) Bob Beckel, former Deputy Assistant Secretary of State and current Fox News contributor, said on air:

“If the U.S. pursues him as it has Osama bin Laden, Assange is safe for years to come.”

The way to deal with this is pretty simple. We”ve got Special Forces. A dead man can”t leak stuff. This guy’s a traitor, he’s treasonous, and he’s broken every law of the United States. The guy ought to be…and I”m not for the death penalty, so if I”m not for the death penalty, there’s only one way to do it: illegally shoot the sonofabitch.

On the same program, Bo Dietl, a former New York cop turned private investigator, jumped in to say, “I”m with Bob.” A little later he added, “You should take this guy out.

By any standard, these and other calls for Assange’s death constitute incitements to murder as much as Ayatollah Khomeini’s fatwa did. The question is whether such speech is protected under the First Amendment. I personally believe that all speech is protected”when it is speech. Julian Assange has the right to publish documents, as do the newspapers with which he shared the them. Salman Rushdie has the right to offend those who read The Satanic Verses“even to offend the many who haven”t read a word of it. In theory, Sarah Palin, Mike Flanagan, and Bob Beckel have the right to say what they think about Julian Assange.