The Shadowy Imam of the Poconos 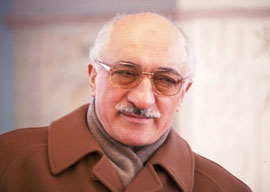 As 2014 dawns, the world continues to keep me furnished with material. For example, the current political shakeup in Turkey turns out to be a mashup of various obsessions and hobbyhorses of mine, such as byzantine conspiracy theories, test prep, the naivetÃ© of American education reform, immigration fraud, the deep state, and even the Chechen Bomb Brothers’ Uncle Ruslan.

This lattice of coincidence begins with Turkey’s prime minister Recip Tayyip ErdoÄan, who is presently besieged by graft scandals following police raids on his inner circle.

With Turkey’s traditional ruling class”the secularist Kemalist generals”finally neutralized by the Ergenekon show trial, the Muslim civilian factions now appear to be plotting against each other. It is widely assumed among Turkish conspiracy theorists (i.e., roughly 98% of all Turks) that the prosecutorial assault on the prime minister was at the behest of ErdoÄan’s former political ally, Fethullah GÃ¼len, a powerful and mysterious Muslim cult leader holed up since 1999 in, of all places, the Poconos, where he has become America’s largest operator of charter schools.

The imam has been preparing for the struggle in Turkey for decades, launching his adherents on a long march through the institutions. The holy man’s Turkish enemies leaked a video in 1999 just before he defected to the US and took up exile in his fortified compound in Saylorsburg, PA. GÃ¼len was shown advising his believers:

You must move in the arteries of the system without anyone noticing your existence until you reach all the power centers….You must wait until such time as you have gotten all the state power….

GÃ¼lenists have since become common within Turkey’s police and judiciary, playing a lead role in last year’s conviction of 254 secularists for allegedly conspiring against the Islamic government. According to Wikileaks, the American ambassador to Ankara, James Jeffreys, cabled Foggy Bottom:

GÃ¼lenists also reportedly dominate the Turkish National Police, where they serve as the vanguard for the Ergenekon investigation—an extensive probe into an alleged vast underground network that is accused of attempting to encourage a military coup in 2004. The investigation has swept up many secular opponents of the ruling Justice and Development Party (AKP), including Turkish military figures, which has prompted accusations that the GÃ¼lenists have as their ultimate goal the undermining of all institutions which disapprove of Turkey becoming more visibly Islamist. (COMMENT: The assertion that the TNP [Turkish National Police] is controlled by GÃ¼lenists is impossible to confirm but we have found no one who disputes it….)

…relations soured in recent weeks after the government tried to shut down private test preparation centers in Turkey, many of which are run by followers of Mr. GÃ¼len and are important for the movement’s recruitment and finances….“ErdoÄan’s efforts to shut down the private schools was the last straw for GÃ¼len and the GÃ¼lenists,” said Steven A. Cook, a Turkey expert at the Council on Foreign Relations.

He who controls test preparation controls the future.

Seriously, if you can get your followers to score higher on the gatekeeper tests, they may become the ruling class of the future“a lesson that American conservatives might ponder. In general, American conservatives have felt that it wouldn’t be sporting for them to think in any organized fashioned about how to game tests such as the SAT. But the older civilizations have little patience for such boyish innocence.

I don’t know anything about about test prep in Turkey, but I know a lady who was a high-school physics teacher in Iran, where she made herself unpopular by refusing to teach “summer school.” In Iran, it’s traditional for public school teachers to provide the highest paying upcoming students a private summer preview course in which they are given all the questions and answers for next year’s tests. (This Iranian attitude toward physics education may help explain why Iran’s nuclear program has been the world’s slowest moving crisis.)

…we have heard accounts that TNP [Turkish National Police] applicants who stay at GÃ¼lenist pensions are provided the answers in advance to the TNP entrance exam.

The GÃ¼len movement receives hundreds of millions of dollars from American taxpayers to operate approximately 130 charter schools in America. Not surprisingly, they claim excellent test scores.

In defense of GÃ¼len, it might be argued that he’s providing the Anatolian heartland with something that was extremely valuable to northern Europe: a business-oriented religious network in the Weberian mode. One reason Mexico is Mexico is because the Counter-Reformation kept Puritanism out of Latin America, and along with it the Protestant work ethic. Turkey, which has long been a sort of Mexico of Europe, could use an Anatolian business class.

On the other hand, the more I look into GÃ¼len, the more he seems characteristically Ottoman. The adjective “byzantine” stems from the labyrinthine and devious politics of the imperial court of the Byzantine Empire, the successor to the Roman Empire. Not everything has changed since 1453.

Of course, the GÃ¼len movement’s test prep schools in Turkey aren’t just about test prep. In an aggressively laicized state, after-school school is the best chance for indoctrinating youths in Islam and/or GÃ¼len’s cult of personality.

“It’s organised like a cult,” a French researcher told FRANCE 24, speaking on condition of anonymity. “In certain places where they meet in Istanbul, it really feels like you’re in a Scientology centre. Leaders make speeches about universal love, and distribute pamphlets with photos of celebrities on them. Private classes are given, but we don’t know if the teachings are religious or not.” Most members are not even allowed to talk about the movement,” the French researcher explained. “The way it functions is totally opaque, which is reminiscent of Freemasons.”

It wouldn’t be a coincidence that GÃ¼len’s Anatolian Muslims model their secret society upon the Freemasons. The secularist Europeanizers they hate used the security of Masonic lodges to launch their Young Turks revolution a century ago.

To Americans, the notion that the Ottoman Empire’s revolution of 1908-1913 was hatched in part in Masonic lodges sounds like Dan Brown crackpottery. But Freemasonry, with its long initiations and complicated handshakes, was useful in impeding the Sultan’s secret policemen at infiltrating cells of reformist conspirators.