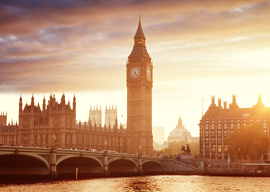 In the first chapter of Shadows of Empire, a novel I wrote twenty years ago, an old shipbuilder and shipping magnate, in conversation with his grandson, my narrator, speaks up in 1906 for Free Trade. “Glasgow,” he says, “was built on Free Trade. So was the Empire. Protection””then being advocated by Joseph Chamberlain”is “wrong in principle and wrong in practice. We depend for our prosperity on the Free Market in goods, with no restrictions and no tariffs.” Free Trade, he says “enriches everyone.”

Free Trade did indeed work very well for Britain in the 19th century. As the first industrialized economy, Britain enjoyed a competitive advantage, especially since the removal of tariffs on imported food enabled employers to keep wages down. Nevertheless by the end of the 19th century, things were less rosy; Britain had already been overtaken by the USA and Germany, competitors who built up their industrial might behind tariff walls. Moreover while the opening of the American prairies and the development of refrigerated meat-transporting ships provided Britain with cheap food, British agriculture suffered. One-third of arable land in England went out of cultivation between 1870 and 1914. If the dreams of global Britain are realized, this might happen again.

“Free Trade may overall enrich a country, but there are always losers.”

It’s not too difficult”in theory, anyway”to get rid of tariffs, but that’s only a first step toward Free Trade, though one that will always be bitterly resented by those sectors of an economy that benefit from tariff Protection, and there are always some. In any case tariff-free trade isn”t necessarily fair trade. It may indeed be decidedly unfair, if it permits and enables countries with an undervalued currency to dump production in excess of their own domestic needs on other markets. Hence, for example, the resentment provoked, and the damage done to native producers, by China’s cheap export-steel policy. Here you have to weigh the balance between the benefit of cheap steel to the American or British construction industry against the severe damage done to home producers, some of whom, unable to compete on price, are hounded into bankruptcy. Free Trade may overall enrich a country, as my veteran Glasgow shipbuilder asserted, but there are always losers. There are enough losers in the USA from NAFTA to make that deal very unpopular in some quarters.

Tariffs, however, are only one part of any Free Trade deal, and these days on account of the low tariffs ordained by the World Trade Organization not the most important part, though probably the easiest to negotiate. There are other, more difficult aspects: questions of intellectual property, of ensuring standards of production and acceptable labor practices, fair pricing, competition rules, the permissible level of Government support for sectors of the economy. All these are matters”and there are other ones”that require some degree of regulation and the creation of an acceptable judicial authority powerful enough to outlaw certain practices and punish those who transgress them. Much progress has been made in these areas within the Single Market of the European Union, in which the European Court of Justice acts as an effective protection against breaches of the rules. When Brexit has become a reality”as it surely will”the United Kingdom will find itself for years engaged in making bilateral deals with other countries and trading blocs, deals requiring the settlement of such matters in a manner agreeable to both parties in the negotiation.