The Sinking of Captain Coward 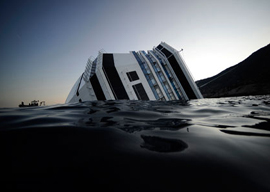 The Costa Concordia capsized on the evening of Friday January 13th after hitting barely submerged rocks close to the tiny island of Giglio 10 miles off the Tuscan coast. Thirty-two of the 4,229 passengers and crew onboard died. Captain Schettino is accused of manslaughter, causing the shipwreck, and abandoning ship.

The Italian skipper had ordered his helmsman to steer the floating citadel close to the island “per fare l”inchino“ (to take a bow) to the daughter of the headwaiter in the Ã  la carte restaurant who lives on the island. He had then left the bridge to go to dinner with a blonde dancer from Moldova who is not his wife. After dinner, he returned to the bridge, female guest in tow, in time to take command of the vessel himself for the “inchino.”

“It remains unclear exactly whose fault it was that the Costa Concordia struck those rocks.”

Once disaster struck, Captain Schettino did not send a Mayday message for 45 minutes. Then, in true Italian style, he abandoned ship while there were several hundred people still onboard. His crew, the Italians among them at least, shoved passengers out of their way in the scrabble for the lifeboats.

He then blamed the disaster on everyone except himself and claimed that had it not been for his skill, thousands of lives would have been lost. In his hometown of Meta di Sorrento in the corrupt and Mafia-infested south, he enjoys the status of a wronged and wounded hero.

The week before his first court hearing began in a theater because the courthouse in Grosseto is too small to accommodate the scrum of journalists and survivors, he even launched a lawsuit against his employers. He is”wait for it”claiming wrongful dismissal and back pay.

The prosecution told the court that Schettino could not take credit for the loss of so few lives. Schettino, who arrived at court wearing sunglasses and looking like an actor from The Sopranos, retorted that God had nothing to do with it: “Ma quale volontÃ  di Dio? Meglio di lui ho fatto io.” (What will of God? I did better than him.)