The Skinny on Obesity 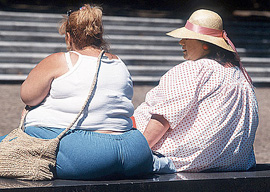 After getting screamed at by my liberal friends for doubting their doom and gloom predictions, one unavoidably oversized fact stuck in my slim, streamlined craw: People ARE getting fat. The average lifespan has been on a steady climb since we began recording it, but medical experts say this is about to change. They say diabetes and other stuff-your-face-related diseases will force the average lifespan into decline as soon as 2020. I hate Chicken Little hysteria but I gotta admit, there are a lot of morbidly obese people around. I just got back from a vacation that included South Carolina and Canada. Everywhere I went, I saw men and women with saddlebags of suet drooping off their shoulder blades, jiggling down onto the street from their Rascals like it ain’t no thang. It made me wonder: Is being a huge tub of lard even considered bad anymore? Do overweight kids still get teased in school? It is still unhealthy, right?

I don’t know much about these things and hate research almost as much as fat people hate exercise, so I called a relative who is one of America’s top transplant surgeons. He agreed to give me the skinny on obesity if I kept his good name out of it.

Taki’s Mag: So is it true? Are humans really about to stop living longer than the previous generation?

Oh, come off it. You really think it’s an “epidemic”?

Yes. Within the next ten years it’s going to be normal to see children with shorter lifespans than their parents.

“Is being a huge tub of lard even considered bad anymore?”

You might be onto something. I was at an ER in upstate NY (long story), and I couldn’t believe the number of outrageously humongous people in there. The waiting room had three oversized chairs and they were all taken, so when the fourth 500-pounder walked in, he had to take a knee on the floor. He was so fat, however, it didn’t even look uncomfortable. His legs were like beanbag chairs.

Ten years ago, we’d have one gurney in the hospital that was oversized. It was made for someone who was around 300 pounds, and you almost never used it. Today, hospitals are using 300-pound gurneys as the normal one and have created custom beds that can handle 500 to 1,000 pounds. The problem with that is, you now have to extend the openings in all the doors. You need special tools to operate on them. The hidden costs go on and on.

Have you ever operated on a really gigantic person?

Yes, and it’s very difficult. You have to go through a lot of fat, and stitching them up afterwards is a challenge.

All right, I’m going to barf.

The problem with the sutures is, behind the skin there’s this open wall of split fat that is still trying to separate. Now the stitches on the outside are the only thing holding this gigantic wound shut. They can’t handle the pressure, so the skin will literally tear apart the sutures.

Ew. What about giving them lipo first?

I’ve tried that and had varying degrees of success. It’s very difficult to operate on these people because everything’s different, even the forceps you use to hold open an incision. They now have to be several inches deep. I’ve had to have custom tools made and I’ve known surgeons who have bought equipment from veterinarians because the tools they have simply can’t handle the depth.

Do you ever dry-heave when you operate?

What does it smell like when you cut it all open?

It’s not great. And it’s very greasy. It smells like burnt bacon in the room, because you have to burn through it to get to the organs.

How did we get here?