The Smoking Gun of the Benghazi Cover-up 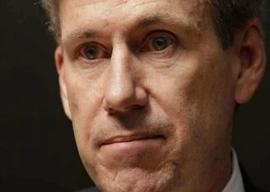 On June 6 of this year, a bomb planted at the U.S. compound in Benghazi ripped a 12-foot-wide hole in the outer wall.

On June 11, the British ambassador’s motorcade was hit by a rocket-propelled grenade, wounding a medic and doctor. The next day, the ambassador was gone and the British Benghazi post was closed.

At the same time, the Red Cross, after a second attack, shut down and fled the city.

“When that occurred,” says Lt. Col. Andrew Wood, who headed the military security team in Tripoli, “we were the last flag flying in Benghazi; we were the last thing on their target list to remove.”

On Aug. 15, at the U.S. compound in Benghazi, an emergency meeting was convened to discuss the 10 Islamist militias and their training camps in the area, among them al-Qaida and Ansar al-Sharia.

On Aug. 16, a cable went to the State Department describing the imminent danger, saying the compound could not defend itself against a “coordinated attack.”

“For the character, competence and credibility of Obama’s entire national security team have been called into question.”

The cable was sent to Hillary Clinton—and signed by Ambassador Chris Stevens.

On Sept. 11, Ambassador Stevens died in a coordinated attack on the Benghazi compound by elements of Ansar al-Sharia and al-Qaida.

Catherine Herridge of Fox News, who unearthed the Aug. 16 cable, calls it the “smoking gun.”

Yet, on Oct. 11, Joe Biden, during the vice presidential debate, asserted, “We weren’t told they wanted more security there.”

While House spokesman Jay Carney said Biden’s “we” applied only to Biden, Obama and the White House. As the National Security Council is part of the White House, Carney was saying the NSC was in the dark over the Aug. 16 cable that had warned about the exact attack that occurred.

What else have we lately learned?

The State Department was following the Benghazi assault in real time.

Three emails came from the compound that night. The first described the attack; the second came as the firing stopped; the third reported that Ansar al-Sharia was claiming credit.

From an Oct. 26 report by Jennifer Griffin, also of Fox News, we now know there were two drones over Benghazi the night of Sept. 11 capable of sending pictures to U.S. commanders within reach of Benghazi, and to the CIA, Pentagon and White House.

We also know that ex-SEAL Ty Woods, in the CIA safe house a mile away, was denied permission to go to the rescue of the compound, and that he disobeyed orders, went and brought back the body of diplomat Sean Smith.