The Sock Fairy: A Complicated Relationship 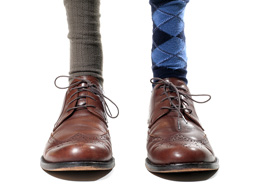 Life is full of irritations, major and minor. One of the minor irritations is the activity of the Sock Fairy, the sprite who seems to inhabit all washing machines, at least all that I have ever owned. However careful I am to put only matched pairs into the machine, the Sock Fairy plays havoc with them and ensures that at least some unmatched socks emerge at the end of a wash.

I have no idea of the motives of the Sock Fairy, though I have a suspicion that he or she is in league with the international cartel of sock manufacturers. I now have a large and growing collection of odd socks, so large that it depletes my supply of bona fide pairs and necessitates the purchase from time to time of new pairs. The Sock Fairy is an exponent of the great commercial principle of built-in obsolescence.

It is true, of course, that many of my odd socks could be formed into approximate pairs, since the great majority of them are brownish or grayish or fawnish. If I wore pairs of slightly odd socks—slightly odd, that is, in the sense that they did not quite match—no one would notice. I mean to say, who goes round examining other people’s socks to check that they match exactly? Moreover, if anyone did so, why should I take any notice of such small-mindedness?

“Complaint can continue indefinitely, whereas a solution occurs but once and destroys the problem forever.”

Oddly enough, though, I feel an inhibition, a bit analogous to a bad conscience, if I leave the house wearing a false pair of socks, as if I were engaged in the perpetration of some kind of confidence trick. After all, most people just assume that my socks are a proper pair; I am misleading them and trading on their trust.

No doubt among my large bag of single socks there are some, perhaps many, true pairs. But trying to match them is very laborious and takes ages. Sometimes I almost convince myself that two socks are a pair, because so many brownish or grayish or fawnish socks are very similar even when they are not identical, but at the last minute draw back from pairing them because I notice that the width of the elastic at the top is different by a quarter of an inch, or their patterned weave is slightly different. And of course if you pair up two socks that are not actually a pair, you are only building up trouble for yourself further down the line.

As I have said, I do not consider this one of life’s major problems, but it is nevertheless a recurring one. And nothing reveals my tendency to decry problems without resolving them more than the fact that recently innovative sock manufacturers (no doubt not members of the cartel) have found a very simple and obvious way to defeat the evil machinations of the Sock Fairy. They have produced pairs of otherwise nondescript socks with the heels and tips of toes of which are in bright unmistakable colors, such as orange or scarlet or purple. This means that they are easy to match.

I wrote about the Sock Fairy once before, and I would like to think that it was my article that concentrated the minds of the sock manufacturers. At least I could then go to my death content that I had made some difference to the world, a difference that represented an improvement. But I cannot have been the only person ever to have drawn attention to the problem, because as soon as I mentioned it to others, they always recognized it. It is very difficult these days not only to have an idea that no one else has ever had, but to be the first to draw attention to it. The solution to the problem was a very obvious one, yet I had not thought of it. Like many a good idea, in fact, it required only a limited level of intelligence to have it, yet I did not have it. Why not? (It might have made my fortune.)

The reason is that I was not looking for a solution to the problem. It never even occurred to me to do so. No: I preferred to complain about it rather than to solve it. For the fact is that there is something profoundly comforting and enjoyable about complaint. It can continue indefinitely, whereas a solution occurs but once and destroys the problem forever. Once one has—as I have—reached a certain age, one does not like change, and solution to a problem means change. And change confronts one with one’s mortality.