The Spice of Death 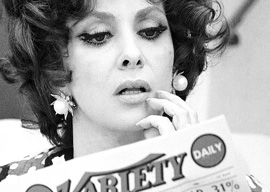 The 107-year-old Variety publications have been sold to the Internet-based Penske Media Corporation. Weekly Variety, daily Variety, and Variety Broadway are all falling into the maw of the owner of Nikki Finke‘s Deadline.com. They were sold for $25 million, down from the asking price of $40 million.

Hard-copy periodicals have been hemorrhaging readers and revenue over the past decade. Variety‘s attempt to go digital has also gone south, primarily because of its pay-per-view policy.

Ever since 1905, when vaudeville reviewer Sime Silverman founded it to offer “honest” news on America’s then-favorite entertainment, the Variety family of publications has been an entertainment-industry mainstay. One of my earliest memories is watching Jimmy Cagney as an aged George M. Cohan in Yankee Doodle Dandy translating the enigmatic Variety headline “STICKS NIX HICK PIX” to a group of young people.

“Merely being an institution is not enough to survive.”

This unique lingo has always been one of its hallmarks, introducing Americans to such terms as “payola,” “boffo,” and “striptease”; studio execs were called “toppers,” Western films “oaters” and “hoofers,” and so on. Having similar roots to the wisecracking New York lowlife dialect that Damon Runyon made famous, it gave readers the illusion of being part of some sort of in-group.

But merely being an institution is not enough to survive. Fueled by the Internet, people want their information far faster than print media can produce it, and they want it for free. Variety’s great rival, The Hollywood Reporter, realized this in 2010 when it gave up being a daily trade paper and morphed into what it is”a weekly glossy magazine, daily PDFs, and a constantly updated online news site. Deadline.com, although lacking its rivals” venerability and dialect, is the news source for young industry professionals today.

Jay Penske has announced that all will stay the same at Variety for the foreseeable future, except that the website’s paywall will go down. Oddly, when his other property, Deadline, sent a reporter to cover the town-hall meeting he conducted at Variety‘s offices at which Penske made these announcements, the journo “wound up escorted from the building by security before it began.” What could this commitment to hard print mean?