The Spit-Roasting of Paula Deen 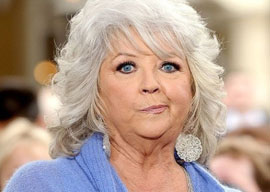 Deep-battered and Southern-fried celebrity chef Paula Deen is crying tears made of butter after admitting in a court deposition that a long, long time ago she said the word “nigger.”

The story became yet another tedious and barf-inducing racial scandal last week. It led to the Food Channel, where the cheesecake-fryin’, nut-droppin’ Georgia porker had ruled the pigsty for over a decade, announcing on Friday that they would not renew Deen’s contract because, well, c’mon, she said the word “nigger” and that’s the modern equivalent of the unpardonable sin.

Amid all the public shirt-rending, the wagging of fingers and shaking of heads, the tut-tutting and tsk-tsking, the eyeball-pluckingly pious denunciations about shamefulness, evil, heinousness, and raw pure unabashed hateful unforgivable Southern wickedness, it mostly escaped notice that Deen (an Obama supporter) said she’d used the word in a discussion with her husband after a black man held a gun to her head while robbing her at the bank where she worked.

“To baser creatures, apologies are usually interpreted as weakness, and we all know how wolfpacks treat weakness.”

We live in a topsy-turvy world where people are far more offended if someone says “nigger” than if they act like one. Thus, last week’s sentencing of three black Marines who murdered a fellow white Marine and his black wife received almost zero notice in the national press.

Deen’s deposition involved a lawsuit filed by a white woman named Lisa Jackson, a former employee at Uncle Bubba’s Oyster House in Savannah, GA. The “Bubba” in question is Deen’s brother, Earl “Bubba” Hiers, who is variously accused in the complaint of drinking hard liquor from a paper cup, calling blacks “monkeys,” saying that Obama should have come down South to “nigger-rig” the Gulf oil spill, saying he wished he could send all his black workers on a boat back to Africa, forbidding black workers from using the restaurant’s front entrance, telling off-color jokes, surfing for porn, and basically doing everything one might suspect a guy named “Bubba” of doing.

Well what I would really like is a bunch of little niggers to wear long-sleeve white shirts, black shorts and black bow ties, you know in the Shirley Temple days, they used to tap dance around.

In Deen’s subsequent deposition, the most infamous passage”apart from Deen unabashedly saying “of course” when asked if she’d ever used “the N-word””involved wedding plans for Bubba that involved strictly black servants garbed in formal attire. Deen said that such plans never came to fruition because she feared someone might “misinterpret” her intentions.

Naturally, the bloodthirsty progressive press misinterpreted and misrepresented her intentions. Various accounts lent the impression that she had actually hired black workers to dress as slaves.

But to baser creatures, apologies are usually interpreted as weakness, and we all know how wolfpacks treat weakness.

On CNN, a gay Jewish man named Howard Bragman relished Deen’s downfall in a manner that was borderline psychotic:

And the day she dies, this will be in her obituary. She has to wear the stain the rest of her life and she’s earned it.

Bragman also said that “words hurt” and “damage people,” although I doubt he was referring to Paula Deen and her hundreds of suddenly unemployed underlings, who were all literally hurt not by a word’s usage but by the sanctimonious lynch mob that reacted to it.