The Starch in the Social Fabric 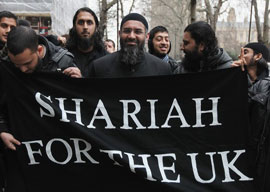 Driving around Spain, one notices all the castles. That’s quite a thing to notice for an Englishman such as myself, as we have thousands of them. But on Spain’s freeways they seem to spring up on the horizon with hourly regularity along with monasteries and nunneries.

Religion means everything to the Spanish”or at least the ones I hang out with”and by religiÃ³n, they mean Catholicism. My favorite bar in Seville, La Fresquita in Barrio de Santa Cruz, has not a space on its walls that is not covered with a representation of Christ or the Virgin Mary, nor a cubic inch of airspace not swamped by the frankincense-laden thurible suspended from the ceiling of its small, single room.

However, it is also one of the only bars that doesn”t have legs of cured ham suspended from the ceilings. The mass public of consumption of ham became a survival strategy in a nation paranoid that its inhabitants might be Muslims or Jews. In this city, people were burned at the stake for the suspicion of observing the Jewish Sabbath, the only evidence for which was the lack of chimney smoke from their houses on a Saturday.

All of this was the direct result of the Moors” conquest of the Iberian Peninsula beginning in 711 AD, an act of Muslim colonialism that wasn’t fully rolled back until Ferdinand and Isabella forced their capitulation at Granada in 1492.

Los Reyes CatÃ³licos, or “The Catholic Kings” as Ferdinand and Isabella were called, were savage in their persecution of what they perceived to be heresy, but they were interestingly non-genocidal. They couldn’t be, as Spain, much like the rest of Europe, was far too racially mixed to be so. Not that they weren’t deeply racist: We owe the phrase “blue blood””sangre azul“to the Christian war leaders from northern Spain rolling up their sleeves to show their blue veins through their pale skin, untainted by Arab or Berber melanin. They were also showing that they weren’t Celto-Iberians or Basques, but rather Visigoths who’d staged an “armed immigration” during the fall of Rome.

Despite, and perhaps even partially because of, the genetic fictions and cultural fascisms on which Spanish national unity was founded, the country entered its Golden Age and amassed an empire on which the sun never set (a phrase coined by Spain but so strongly adopted by the British that most of my countrymen think we came up with it ourselves).

However, following those very same fictions and fascisms, the very strong mistruths about divine election and entitlement they told themselves and others, they spent their way out of empire at an epic rate. Between Columbus’s first voyage and the Treaty of Westphalia that ended the Thirty Years” War in 1648, they shipped 190 tons of gold and 16,500 tons of silver across the Atlantic. Adjusted for average earnings, this comes to almost $500 trillion spent in 156 years on pretty buildings to celebrate, and ugly wars to enforce, social and religious unity.