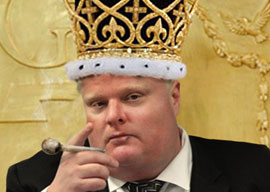 Politicians and drugs: Is there ever a more brilliant combination?

Toronto Mayor Rob Ford doesn”t seem to think so. A man who loves to hit the sauce, Ford is fighting to maintain his office over an alleged cell-phone video showing him smoking crack cocaine. The police have reportedly obtained the footage but have yet to make it public. In a press conference following the news, Ford asked that the video be released for all to judge. Less than a week later, the gluttonous mayor admitted that he had, in fact, taken a hit or two of the white rock. It was cool, though: He did it all in a drunken stupor. (Someone should have told Ted Kennedy to use that excuse.) Ford remained steadfast in refusing to step down and vowed to keep doing the work he loves.

It was all very courageous, except for the fact that a government office, of all things, is the subject being fought over. Rob Ford is not the head of a megacorporation nor is he a saint. He is, above all, a figure who participates in the great circus known as democracy. As the old Mencken saying goes, “The saddest life is that of a political aspirant under democracy. His failure is ignominious and his success is disgraceful.” Whatever the outcome of Ford’s predicament, there is no winning. Either he stays a political officeholder or becomes a disgraced narcotic abuser”both positions that require an inordinate amount of selfishness.

“I want my pols to be conniving, boisterous, sloppy, and upfront about their sociopathic desire to control society.”

Ford’s trouble all started back in May when there was a rumor swirling around the Great White North that there existed a video of him toking on some devil’s love potion and making unseemly political comments. The gossip website Gawker was the main reporting source, while the Toronto Star also picked up on the story. The summer stayed quiet as the alleged video failed to surface. That didn’t stop the editorial boards of the National Post and Toronto Sun from demanding Ford’s resignation. The mayor was fired from coaching football at Don Bosco Catholic Secondary School. And despite no actual evidence of wrongdoing, his chief of staff was let go and half of the mayoral staff resigned.

Like his doppelganger the Stay Puft Marshmallow Man rampaging through Manhattan in Ghostbusters, Ford pressed on undaunted. He continues to maintain that he is innocent of any serious wrongdoing, even when a bloody conspiracy seems to be unraveling around him. His personal driver Alessandro “Sandro” Lisi was arrested under suspicion of selling marijuana to get a hold of the now-infamous video. Anthony Smith, one of the alleged individuals with Ford in the clip, was killed back in March and the assailant pled guilty to manslaughter in June. Another figure in the same video was shot and wounded in the same melee that took Smith’s life. Both were suspected to be members of the Dixon City Bloods, a Canadian gang if you can believe such things exist in the land of “peace, order, and good government.”

If Ford thinks downplaying all this sex, drugs, and rock and roll will lead to his exoneration in the leftist media, he’d better think again. The press wants nothing more than to tear down the conservative mayor. The Fourth Estate always seems to fawn over elected leaders, except for those who aren’t closet socialists. When Toronto Police Chief Bill Blair confirmed his department was in possession of the crack video, reporter Jonathan Goldspie admitted he was “shaking.” More indignant calls for Ford’s resignation followed the announcement.

Sorry, fellas, but if chasing the dragon is the worst a public servant does, perhaps you should be feel fortunate.

Having spent the last weekend in Toronto, I can say with relatively good authority that the citizens of Canada’s largest metropolis don’t actually care about the scandal. Colleagues, fellow travelers, and cab drivers all agreed: Ford might be a buffoon, but it doesn’t really matter what rocks he chooses to smoke. He was duly elected to office and has since governed, for the most part, much like he promised. In the days of “You can keep your health insurance if you want (except not),” it’s refreshing to see a political figure not pull an immediate fast one.