The Straight Dope on Homosexuality 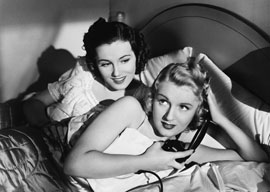 Is homosexuality a perversion? If not, is it entirely normal? Almost normal?

These days, the very idea of perversion is out of fashion. The Washington Post would probably use the word only to describe an intense desire to balance the budget or enforce immigration laws.

However, a practical, even scientific definition of sexual perversion begins by defining the objects of normal, healthy reproductive desire. Wanting to have sex with anything that falls outside that definition is perversion.

But what do all these excluded objects of desire have in common? They are a complete dead end. For someone’s reproductive drives to be oriented toward children or rocks or goats or dead people is perverse because a reproductive urge in any of those directions is bound to fail. It’s an evolutionary absurdity.

So we’re not far if we define perversion as acting on a sexual desire for something or someone with whom reproduction is obviously impossible. But that definition would classify homosexuals among the perverts.

To consider homosexuality abnormal is now considered outmoded”maybe even perverted. The American Psychological Association calmly explains that “Both heterosexual behavior and homosexual behavior are normal aspects of human sexuality.” However, people who say that are in the odd position of having to agree that, yes, having a reproductive urge for every other reproductive dead end is abnormal and maybe even perverse, but it’s fine if men want to have sex with men.

I can’t think of any scientific or logical basis on which to make that exception. A dead end is a dead end, whether it’s a sheep or a corpse or someone of the same sex or a toaster.

Perversion or not, homosexuality has become respectable with astonishing speed. Before 1962, it was illegal in every state. As late as 2003, 14 states still had anti-sodomy laws on the books. Now the District of Columbia and 14 states (and eight American Indian tribes) recognize same-sex marriage, and four more states recognize same-sex “civil unions.”

As recently as 1982, the Department of Defense stated bluntly: “Homosexuality is incompatible with military service.” Nowadays, open homosexuals serve in all branches of the military.

Is this progress or decadence?

To answer that question, it helps to have some basic information on homosexuality and its consequences, but it’s surprisingly hard to come by. Homosexual activists are desperate to persuade us that they are statistically indistinguishable from heteros, while Christian anti-sodomites want us to think homosexuals are as queer as queer can be. Not many people seem just to want the truth.

First, what percentage of Americans are homosexual? The famous Kinsey Report of 1948 reported wildly high figures: that 27% of young, unmarried men had “homosexual activity to the point of orgasm,” and that 10% of 20-year-old married men had homosexual affairs outside of marriage.

There have since been plenty of studies and estimates, but one of the best is a 2012 Gallup survey that asked more than 120,000 adults if they were LGBT (lesbian, gay, bisexual, or transgender). Slightly more women (3.6%) than men (3.3%) said they were. According to a Centers for Disease Control survey, only 1.3% of women think of themselves as exclusively lesbian.

The Gallup survey found racial differences, with whites the least likely to say they were LGBT. Blacks were 44% more likely, Asians 34% more likely, and Hispanics 25% more likely. Contrary to what most people think, LGBT are more likely to be poor than are heteros. Gallup also found very little regional variation, with Southerners about as likely to be LGBT as people on the two coasts. Somewhat disquietingly, Gallup found that fully 20% of LBGTs are married to people of the opposite sex.

How promiscuous are homosexuals? Some people argue that except for about 15% who are wildly promiscuous, homosexuals are no different from heteros. The anti-sodomites like to quote a 1997 study from the Journal of Sex Research that polled 2,583 older homosexuals and found that the most common number of lifetime partners fell somewhere between 101 and 500, and that 10% to 16% reported having more than 1,000. A 2009 Australian “Gay Census” that was not restricted to age found that a quarter of homosexuals reported over 100 partners and 10% had so many they had “no idea.” The older the men were, the more likely they were to be in the over 100 or “no idea” categories.

It’s harder to get good data on lesbians, but the figures are lower. The same Australian survey found that 52% of lesbians (as opposed to only 17% of male homosexuals) reported between two and ten partners, and only 1% said they had had more than 100. A British study found that the total number of partners for most lesbians was between five and ten.

Disease rates are one of the few undisputed facts about homosexuals. The Centers for Disease Control says that in 2008 “men who have sex with men” accounted for 63% of new syphilis cases. If men are half the population and 3.3% of them are homosexual, it means that 1.65% of Americans account for 63% of the country’s syphilis cases.

The CDC says both homosexuals and lesbians are more likely than heterosexuals to take illegal drugs and drink too much”but it gives no figures. The American Lung Association says homosexuals smoke cigarettes at about twice the rate of heteros.

Medical authorities also agree that homosexuals and lesbians are more likely than heteros to have anxiety, depression, bipolar disorder, and to commit suicide. The anti-sodomites say this proves homosexuals are botched. The other side says that they drink and smoke and take drugs and go crazy because of social rejection.

Homosexual men get anorexia and bulimia at 10 to 15 times the rate for heterosexual men. This is no surprise, since they are trying to attract men that care about looks. Lesbians have about twice the rate of eating disorders as heterosexual women.

There is one medical outcome on which homosexuals do better than heteros: They are only half as likely to be obese, which is consistent with trying to look good. Lesbians, who are notorious for not caring how they look, are two and a half times more likely than hetero women to be fat or obese.