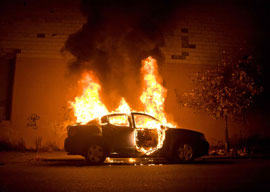 According to a poll carried out by the Figaro newspaper, only 17% of the French believe that 2014 will be a good year, but in fact it started very well for France. Only 1,064 cars were burned by youths in the banlieues this New Year’s Eve”about a hundred fewer than last year. Who says that there is no progress? The French Minister of the Interior congratulated the 57,000 policemen throughout the country who were on duty that night for their preventive work (one fewer cars1 burned per 570 policemen), but he still won’t publish the number of cars burned in France annually for fear of provoking youth to an attempt to beat the record. Yes, youth is the idealistic springtime of man’s life.

Another optimistic way of looking at the figures is to compare the number of cars burned with the number of cars not burned. This will put the figure into better perspective. About 19,999,000 cars in France were not burned on New Year’s Eve; that is to say, 99.995% of them. Surely this is the way the figures should be presented to improve the population’s morale? Instead of the murder rate, then, we should have the non–murder rate. The result is even better for most European countries: About 99.999% of people are not murdered in any given year.

“As Bakunin pointed out a long time ago, the destructive urge is a creative urge.”

We should always remember the story of the Soviet commissar who, when asked by a soldier in the audience he was addressing whether it was true that there were more cars in the United States than in the Soviet Union, thought for a moment and then replied, “Yes, comrade, but we in the Soviet Union have more parking spaces.”

However, we must not be too optimistic that optimism can be instilled in this way, for almost any statistic can be viewed in a dark light. From the point of view of supposedly Keynesian economics, for example, the decline in the number of cars burned in France on New Year’s Eve was a change in precisely the wrong direction. As everyone knows the European economy is in the doldrums, suffering from a lack of aggregate demand. Government spending cannot take up the slack because governments such as that of the French have been running deficits for forty years, and if they were to try to increase their expenditure yet further there would be another debt crisis (if the first such crisis has ever gone away, that is).

No, the solution can come only from real growth; that is to say, from the private sector. The French have been accused, because of their immemorial Colbertian dirigiste economic culture, of lacking economic initiative. (They were famously even once accused by a great American thinker of lacking a word for entrepreneur.) That is why the ambition of so many of them is to be a fonctionnaire, a civil servant.

This view of the French, however, is in complete contradiction with the initiative shown by youth in the banlieues. Having read Mr. Krugman in The New York Times, they have been persuaded that there is a chronic lack of demand in the French economy that they have decided to stimulate by burning cars. What better stimulation, indeed, could be imagined? The roughly 40,000 cars burned a year (as I have said, no one knows the precise figures) provide employment for thousands of people. The cars have to be replaced, so manufacturing is encouraged; service industries such as sales and insurance are likewise given a fillip. When M. (soon to be president) Sarkozy called the rabble who rioted in 2005 “scum,” he should really have thanked them for their presciently Keynesian conduct.