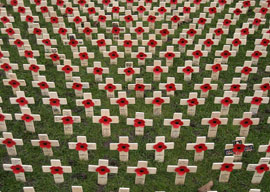 I was in England for Remembrance Sunday this year. The wreath-laying ceremony at the Cenotaph was very moving. I had forgotten how much emotion the British invest in this and how high a proportion is imaginatively keyed to WWI. Remembrance Sunday is defined to be the Sunday closest to Armistice Day, November 11, when the guns fell silent on the Western Front in 1918.

It is a clichÃ©”true, of course, like most clichÃ©s”that every nation has a special place in its collective heart for its bloodiest war. For Americans that would be the Civil War. Being a half-century further in the past than WWI, the Civil War doesn’t engage American emotions as strongly as WWI does the Brits of today. Possibly things were different in 1961. I wasn’t here in the USA; I don’t know.

The notion of WWI that I grew up with in 1950s England was of the Stupid War. British social antagonisms at that time revolved around class, so that the stupidity was attributed to the ruling classes, with General Haig the emblematic figure. The poor brave Tommies were “lions led by donkeys,” Haig being the Donkey-in-Chief. The whole war was pointless and unnecessarily prolonged, and Upper-Class Twits were to blame.

“WWI was by any rational assessment of costs and benefits a monumentally stupid war.”

By the 50th anniversary of the war in 1964, this had become received wisdom among Britain’s educated classes. It found definitive expression in the stage musical, later a movie, Oh! What A Lovely War. (Long Island’s Adelphi University is doing a revival next month.)

Professional historians have since gone through their customary cycles of revisionism and re-revisionism. Haig has plenty of defenders, as does the principle that small, weak countries in vulnerable locations, like Belgium, should be able to rely for survival on treaty arrangements with bigger neighbors.

Treaties aside, Britain’s decision to go to war can be seen in the long context of that nation’s ancient fear of a single power controlling continental Europe: Spain in the 16th century, France in the 18th, Russia in the Cold War. Any power that attained European supremacy, the British reasonably believed, would soon turn on them.

Even the German and Austrian decisions that got the war rolling were based on reasonable, or not wildly unreasonable, premises.

For all that, though, and with due allowance for the well-known optometric precision of hindsight, WWI was by any rational assessment of costs and benefits a monumentally stupid war; though the stupidity was general, not restricted to any section of society. The original decisions may have been reasonable, but once thousands had died the Sunk Cost Fallacy took hold, dooming millions more.

Four great civilized empires (Russia, Germany, Austria, and Turkey) were shattered and a fifth (Britain) was holed below the waterline. Non-Europeans lost what respect they’d had for the world-bestriding white race and turned away from the notion of the West as a mentor.

Kipling’s fevered warning that “the Hun is at the gate” and the boast inscribed on the Victory Medal that this was a “war for civilization” were absurd. The Germany of 1914 was, by general agreement, the most civilized, most advanced nation in Europe, as Bertrand Russell”whose first published book was on German politics”testified: