The Suffrage of the Insufferable 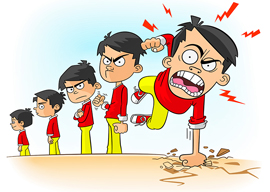 One of the merits of Christianity at its best is that it reconciles the infinite greatness of man with his infinite littleness. On the one hand man is created in the image of God, and each and every individual is unique as an object of God’s love and concern; on the other, he is as nothing by comparison with his maker.

If you take away the second consideration, what you get is unlimited self-conceit. The infinite greatness of man, unconstrained by his infinite littleness, gives rise to people with rights but no duties who in effect worship themselves and become metaphysically egotistical. The existential equality before God gives way to a demand for sublunary equality in all respects: an inflammatory demand that in practice can never be satisfied and results in permanent resentment, even by those who, to all external appearances, are among the most fortunate people who ever lived. It is, alas, easier to brook no superiors than to feel one has no inferiors, which is perhaps why we are inclined to think those people rich who have more money than we, but seldom conclude that we are rich because there are many people poorer than we. That is why President Hollande was able to say, in the belief that he was speaking the plain truth, that he did not like the rich. What he meant was that he did not like those richer than he; for, like most of us, he has no vocation for genuine poverty.

These were thoughts that occurred to me as I read Democracy as a Neocon Trick by my good friend Alexander Boot, a bracing attack on the shallow notion that democracy as defined by the holding of periodic elections based upon universal manhood (and, increasingly, adolescent) suffrage is the source of all liberty and political virtue, and that no other exists or has ever existed.

“The more firmly the politicians believe in their heavenly mandate, the more the political class is divided from the sacred people from whom that mandate allegedly derives.”

Unlike the author, I am not a believing Christian; but unlike many democratic enragÃ©s, I am prepared to accept that our civilization is largely Christian in inspiration, and that it is difficult (though not impossible) to maintain a proper balance between human self-respect and a proper modesty without a certain kind of religious belief. For many people it is probably impossible; and even many outwardly religious people use their belief to secure purely secular ends by egotistical means.

One of the problems of modern society is the difficulty many people now have with accepting and obeying rules that they neither made themselves nor can they deduce from any of their own, self-chosen first principles, chief amongst which is the democratic one that a cat may look at a king. That is why, if you take the risk of asking a person who is behaving in a mildly antisocial way to desist, he will suddenly turn moral philosopher and demand an incontrovertible proof that he should not behave in that way.

Rarely, if ever, can such a proof be given, both for metaphysical and empirical reasons. For example, I have found myself in the absurd position of trying to prove to someone who has put his feet up on the seat opposite him in a train that doing so is actually harmful. As far as I am aware, no scientifically controlled studies have been done on the question; further research is therefore required to establish it, and until such time as it is done, people may put their feet up on train seats with a perfectly clear conscience. The bad faith of all this is evident, for people demand such proofs only when they are behaving badly, never when they are behaving well.

One of the arguments of my friend’s book is that idolatry of elective democracy as the political and ethical summum bonum inevitably leads to an absence of any sense of limitation in the political class. As he points out, the founding fathers of the American republic were decidedly not democrats, and indeed feared democracy as an inevitable gravedigger of freedom; but We the people (meaning the few of us here assembled) did not find a formula for limiting the power of We the people, because no such formula exists. As the doctor in Macbeth says, “Therein the patient/ Must minister to himself”: in other words, if a man has no inner sense of limitation, no mere constitution is going to restrain him.

Modern politicians, having been given the mandate of heaven (vox populi vox Dei), do not accept limitations of their authority or their moral competence, even if, in practice, only a third or even a quarter of the eligible voters have voted for them. Procedural correctness is all that is necessary for such a man to feel justified in pursuing his own moral enthusiasms at other people’s expense.

But the more firmly the politicians believe in their heavenly mandate, the more the political class is divided from the sacred people from whom that mandate allegedly derives. (I have noticed with astonishment recently how increasingly many of the potential candidates in the perpetual American presidential race are close relatives of previous candidates or at least of high-flying politicians.) Indeed, many a monarch and even dictator has been more physically accessible to the populace than modern democratic politicians, suggesting a deficiency of real rather than assumed or theoretical legitimacy. Democracy in the modern sense encourages monomania in the population, in which every citizen is viewed as, and many actually become, a potential assassin, from whom the democratic politician must be protected like gold in vaults. Where politics is the location of all virtue, politicians are the lightning conductors of all discontents.