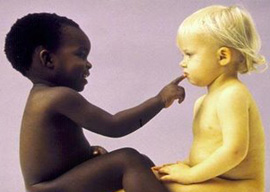 There is much talk about “the talk.”

“Sean O’Reilly was 16 when his mother gave him the talk that most black parents give their teenage sons,” Denisa R. Superville of the Hackensack (NJ) Record tells us. Meanwhile, down in Atlanta: “Her sons were 12 and 8 when Marlyn Tillman realized it was time for her to have the talk,” Gracie Bonds Staples writes in the Fort Worth Star-Telegram.

Yes, talk about the talk is all over.

There is a talk that nonblack Americans have with their kids, too. My own kids, now 19 and 16, have had it in bits and pieces as subtopics have arisen. If I were to assemble it into a single talk, it would look something like the following.

(1) Among your fellow citizens are forty million who identify as black, and whom I shall refer to as black. The cumbersome (and MLK-noncompliant) term “African-American” seems to be in decline, thank goodness. “Colored” and “Negro” are archaisms. What you must call “the ‘N’ word” is used freely among blacks but is taboo to nonblacks.

“There is a talk that nonblack Americans have with their kids, too.”

(2) American blacks are descended from West African populations, with some white and aboriginal-American admixture. The overall average of non-African admixture is 20-25 percent. The admixture distribution is nonlinear, though: “It seems that around 10 percent of the African American population is more than half European in ancestry.” (Same link.)

(3) Your own ancestry is mixed north-European and northeast-Asian, but blacks will take you to be white.

(4) The default principle in everyday personal encounters is, that as a fellow citizen, with the same rights and obligations as yourself, any individual black is entitled to the same courtesies you would extend to a nonblack citizen. That is basic good manners and good citizenship. In some unusual circumstances, however” e.g., paragraph (10h) below” this default principle should be overridden by considerations of personal safety.

(5) As with any population of such a size, there is great variation among blacks in every human trait (except, obviously, the trait of identifying oneself as black). They come fat, thin, tall, short, dumb, smart, introverted, extroverted, honest, crooked, athletic, sedentary, fastidious, sloppy, amiable, and obnoxious. There are black geniuses and black morons. There are black saints and black psychopaths. In a population of forty million, you will find almost any human type. Only at the far, far extremes of certain traits are there absences. There are, for example, no black Fields Medal winners. While this is civilizationally consequential, it will not likely ever be important to you personally. Most people live and die without ever meeting (or wishing to meet) a Fields Medal winner.

(6) As you go through life, however, you will experience an ever larger number of encounters with black Americans. Assuming your encounters are random”for example, not restricted only to black convicted murderers or to black investment bankers” the Law of Large Numbers will inevitably kick in. You will observe that the means “the averages” of many traits are very different for black and white Americans, as has been confirmed by methodical inquiries in the human sciences.

(7) Of most importance to your personal safety are the very different means for antisocial behavior, which you will see reflected in, for instance, school disciplinary measures, political corruption, and criminal convictions.