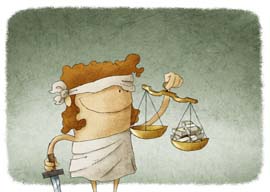 Shortly after my arrival for a short visit to New York City, I had the happy idea of going to the criminal courts on Centre Street. They are the Metropolitan Opera of the criminal-justice system, and as an occasional expert witness in British courts, I wanted to see how these things were done in America.

Quite by chance I arrived at a dramatic moment in a dramatic trial of a dramatic crime. A man called Elliot Morales, charged with murder in the second degree, who was representing himself, was about to make his final address to the jury.

Even the entry into the court of that august assembly of twelve of Morales” peers was interesting. If they were to remake the film 12 Angry Men, they would have to retitle it 12 Slovenly Men and Women. These days, any smartly dressed person is rejected as a juror because he or she is automatically deemed to be in favor of a guilty verdict, criminal law being regarded as a muted form of class war. The jury, then, had not dressed for the occasion; it wore the kind of casual clothes that many people now think are suitable for all occasions. But the juror who most caught my eye was a fat young black man who sauntered into the court with his hands in his pockets in what is known as the pimp roll. “Take your hands out of your pockets in front of the judge, you slob!” I wanted to exclaim, but wisely held my silence.

“Morales had learned some law in order to be able to defend himself. It was a pity that it took him a murder to apply his intelligence.”

Strangely enough, though, the jury seemed to take its responsibilities seriously; it paid close and intelligent attention to the proceedings. My experience of juries in England is that, their grubby appearance notwithstanding, they generally arrive at the right verdict.

I didn”t know anything about the crime when Morales rose to speak, though it was so notorious that it had made the international press. The defendant was certainly not the kind of man one would instinctively cross the road not to meet, as so many murderers are; he was slight and even scholarly-looking. At the very least one would have expected him to be a bureaucrat rather than a gangster.

He was a Puerto Rican in his 30s who spoke with a very slight accent, though his command of English was excellent, well above average. His main arguments were that all the prosecution evidence was tainted, that the policemen in the case were lying, that there were contradictions in what the prosecution witnesses had said suggestive of dishonesty, that the forensic evidence favored his own account rather than the prosecution’s, that there had been prosecutorial abuse, and finally, with deep emotion, that the allegation against him was not the kind of thing that he did.

It was a fine performance and, not having heard the evidence against him, I found myself almost swayed by it. He had provided details that seemed to point to contradictions in the prosecution case, and if he was acting, he was doing so with some considerable skill. We all know that, in their eagerness to convict, police and prosecutors are sometimes unscrupulous; perhaps this was one of those cases.

Then the assistant district attorney, the prosecutor, rose to speak. She was a young woman and will go far. She presented the case against Morales with clarity and implacable emphasis. By the end of her speech, which must have lasted about two hours, I was convinced of Morales” guilt.

She began by replaying the recording made by the policemen immediately after Morales” arrest. He was cackling like a hyena and exclaimed, “The diagnosis, doctor, is dead!” It was chilling to hear a man who had indisputably just shot someone dead in the street and had tried to shoot a pursuing policeman into the bargain finding the whole episode so deeply amusing. He was neither drunk nor had he taken drugs, which might at least have explained though not excused his callousness. It was difficult to connect the man on the recording with the man who had just addressed the jury.