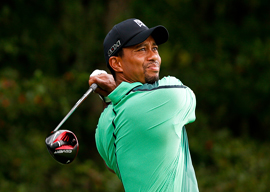 A year ago, after a decade of worsening pain from swinging hard since infancy, Tiger Woods, perhaps the highest-paid athlete in history, appeared headed for the same fate as Philip Seymour Hoffman, Prince, and Tom Petty. But this spring Woods is grinding away again on tour, playing surprisingly respectable golf.

Now 42, he may never win again. Or, who knows, Woods may put on a late charge toward the only records he doesn’t hold: Sam Snead’s 82 PGA wins (Woods has 79), Jack Nicklaus’ eighteen major championships (Woods has been stuck at fourteen since he memorably limped to the 2008 U.S. Open title), and his tennis peer Roger Federer’s twenty Grand Slam titles.

With the U.S. Open coming up in June at Shinnecock Hills in the Hamptons, it’s worth reviewing the new tell-all biography Tiger Woods by Jeff Benedict and Armen Keteyian. Like his mentor Michael Jordan, Tiger benefited from advancements in the techniques of access journalism for controlling his media image, until it all fell apart in the sex scandal of 2009. So it’s informative to compare what Benedict and Keteyian say actually happened with what you had been told by the press at the time.

Woods being part black via his blowhard father was usually thought of as the most important element of his story, an angle assiduously pushed by Earl Woods. The elder Woods told a sports agent when Tiger was a 5-year-old sensation, “I believe that the first black man who’s a really good golfer is going to make a hell of a lot of money.”

But this exhaustive book doesn’t come up with much evidence for the pre-disgrace assumption that Tiger’s black side was key. For example, his father liked to tell the story of how as a kindergartener, Tiger was nearly lynched by racist 5-year-olds. But the authors can’t find a shred of proof for Earl’s oft-told tale. It appears to be just another Hate Hoax.

By the time Tiger was born in the mid-1970s, kids of military parents with previously exotic backgrounds (his parents met in Thailand during the Vietnam War when his father was a Special Forces lieutenant colonel and his mother, from an affluent but hard-hearted Bangkok family who had dumped her in a boarding school, was a secretary) were becoming much less rare in Southern California. Like Barack Obama growing up in Hawaii, Tiger was another mixed kid in a place less obsessed with black vs. white than the rest of the country.

“It’s informative to compare what Benedict and Keteyian say actually happened with what you had been told by the press at the time.”

In truth, culturally, Tiger has always seemed about 99 and 44/100ths Orange County Republican suburbanite. The authors, for instance, recount his rudeness to Bill Clinton, attributing it to the self-centeredness, ingratitude, and poor manners that Tiger’s parents inculcated in him to nurture the cold-blooded personality that intimidated the best golfers in the world from 1997 to 2008. The writers don’t, however, consider the possibility that Woods didn’t like Clinton because Bill is a Democrat.

Woods’ astonishing twelve-stroke victory as a 21-year-old at the 1997 Masters tournament, followed by a peak of dominance in 2000–01 when he uniquely won all four professional majors in a row, was widely predicted to revolutionize the demographics of golf, with blacks pouring into the game.

But that didn’t happen.

In fact, before Tiger, five different black golfers had won a total of 23 PGA tournaments. Unlike Tiger, each had a life story that would make an entertaining biopic. For example, Lee Elder chauffeured for America’s most notorious professional gambler, Titanic Thompson. After blowing into town and negotiating an ever-mounting bet with a couple of local saps, Thompson would eventually insist that, hell, he and his chauffeur could beat this burgh’s two best golfers. At which point the future PGA stalwart Elder would stop polishing the limo and answer that why, yes, sir, Mr. Thompson, he’d much appreciate the chance to try his hand at golf.

At present, however, the obscure Harold Varner III is the only black golfer besides Tiger on tour. A big reason is that blacks don’t caddy anymore, finding it racially demeaning. So caddying, formerly a common route for poor boys to become golfers, is now a specialty of the affluent. For instance, some caddies at Shinnecock Hills are Duke U. students who find it worth their while to fly from North Carolina to Long Island on weekends to loop.

Instead, Tiger Woods raises the question of whether we’ve largely overlooked the more important East Asian side of his heritage.

A Sapir-Whorf excuse is that, after all, we lacked a term in English to characterize Tiger’s highly focused mother until Amy Chua’s 2011 comic memoir, Battle Hymn of the Tiger Mother.

If Earl Woods, with his worsening drinking and whoring, was a dismaying character, Kultida Woods was perhaps the scarier of Tiger’s tiger parents. For instance, she once offered in her broken English her opinion of her retired Green Beret husband:

“Old Man is soft. He cry. He forgive people. Not me. I don’t forgive anybody.”

Instead of revolutionizing the number of blacks in golf, the social impact of Tiger’s example turned out to be far greater on Asians. East Asian female players, whose parents were typically inspired by Tiger’s parents, now dominate the Ladies Professional Golf Association with nine of the top twelve golfers on 2018’s money list.

While success in women’s golf is almost wholly socially constructed by fads—in the stories of F. Scott Fitzgerald and P.G. Wodehouse, for instance, girl golfers represent upscale glamour—men’s golf has been less demographically malleable because some boys are always just going to love hitting a ball with a stick. Still, part-Asian guys such as Jason Day and Rickie Fowler are among the best golfers today.

More broadly, as the most famous athlete in the world, Tiger Woods was seen by Asians as validating their tendency toward Tiger Parenting. This has been a more important trend altering American society recently than anything involving African-Americans, whose role in American life, despite vast publicity heralding every single thing involving blacks, has been contracting upon fewer and fewer cultural interests. (For example, a black driver won a NASCAR race in 1963, which seems almost unimaginable 55 years later.)

Benedict and Keteyian provide a ticktock timeline of Woods’ career with its sometimes-astonishing backstory (such as Tiger’s growing obsession between his father’s death in 2005 and his leg giving out in 2008 of following in the tradition of Pat Tillman).

I would have preferred a more analytic approach that addresses long-running questions such as how to allocate the reasons for Tiger’s overall supremacy among his relative superiorities in the physical, emotional, and cognitive facets of the game.

But the authors do pause to consider Tiger’s career as a child golf prodigy who appeared on national TV from age 2 onward in light of Malcolm Gladwell’s celebrated 10,000 Hours of Practice assertion.

Gladwell, in his fuzzy way, claimed both that nobody can be world-class at anything highly competitive without first putting in 10,000 hours of focused practice (which, with a few exceptions such as sprinting, is an informative rule of thumb that Malcolm deserves credit for publicizing), and that anybody can be world-class with 10,000 hours of practice (a self-evidently bad idea).

A man named Dan tried to implement Gladwell’s dumb version of his 10,000 Hours rule by quitting his job at age 30 to make the pro tour by practicing golf full-time for five years. Dan quickly became a fine golfer, much better than, for example, me. But after 6,003 hours, having plateaued at breaking 80 rather than 70, he was burned out on golf.

According to the authors’ back-of-an-envelope calculations of little Tiger’s fanatical schedule at the driving range, he reached his first 10,000 cumulative hours of intense practice by age 12.

Not surprisingly, over the past fifteen years or so, Tiger periodically appears sick of golf. But never having been allowed any hobbies as a boy, he doesn’t really have much else to do with his time. And because he doesn’t need to sleep much, he has lots of time to get into trouble.

The authors quote what Jimmy Stewart, a man who made it through both decades of Hollywood stardom and months of Catch 22-style warfare over Germany with his sanity and judgment largely intact, said to TV host Mike Douglas after meeting the Woods family in 1978:

“I’ve seen too many precocious kids like this sweet little boy, and too many starry-eyed parents.”

By the way, because this book’s manuscript was no doubt vetted line-by-line by libel lawyers, it’s depressing that nobody noticed that the authors’ repeated employment of the phrase “begs the question” to mean “raises the question” is wrong.