The Tournaments of Tottenham 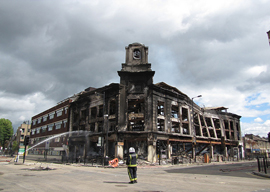 In 1653, the year Cromwell became Lord Protector of England, there appeared the first edition of what would become a classic—Izaak Walton’s The Compleat Angler. A country then devastated by war turned gratefully to the pastoral peregrinations of “Piscator,” “Auceps,” and “Venator,” who pass through what is now Tottenham on the road out of London and argue good-naturedly about the relative merits of fly-fishing, falconry, and hunting.

But the Tottenham that the fictive sportsmen traversed has become an especially insalubrious suburb whose name was flashed around the world over the weekend as massive race riots followed Thursday’s fatal shooting by police of Mark Duggan, AKA “Starrish Mark.”

Duggan’s girlfriend said she was shocked he had a gun but admitted he had become paranoid after a rapper cousin was stabbed to death. A 53-year-old friend commented, “Yes, he was involved in things but he was not an aggressive person.” It appears the police agreed with the first half of that sentence if not the second, because this was a pre-planned operation. Fifteen minutes before he died, Duggan sent a BlackBerry message telling friends that undercover police had “jammed me up,” and his paranoia may have been justified.

There is a well-known colloquialism about Tottenham, first recorded in 1536—“Totynham shall turn French,” to refer to an unlikely or remarkable change. But Africanization is an even unlikelier metamorphosis.

Tottenham (whose western boundary is marked appropriately by Black Boy Lane) was poor in the 1950s and therefore attracted immigrants—it still does. The borough’s southern part is one of Europe’s most ethnically diverse areas, with nearly 300 languages spoken—but the dominant group is Afro-Caribbean. The sad suburb is accordingly an epicenter of “Operation Trident,” the Metropolitan Police’s always busy unit that deals with black gun crime. (Roughly 95% of gun crime in London involves at least one black participant, according to a police officer cited in the Daily Telegraph.)

“It only takes a rabble to riot. And neutralizing the numbskulls is not as easy as it might once have been.”

Although Tottenham is a cultural center, it has also been one of the main hotspots for gangs and gun crime in the United Kingdom during the past three decades.

My, who’d have thought that?

The suburb is also notorious even by London standards for muggings, drugs, and rapes. It is therefore not only the police who get a bloody good hiding from “the community,” but “the community” itself, and the national taxpayer through benefits bills.

A farmer named Tota, mentioned in The Domesday Book and believed to have owned the land that is now Tottenham, would be bemused by the fate of his former fields. So would the Scottish royal family, who owned lands here until the 14th century. So would the 15th-century humorist who wrote The Turnament of Totenham, a lyrical ballad about drunken peasants jousting, using scythes instead of swords, and blowing wooden trumpets.

So would Henry VIII, who hunted in “Totnam” Wood and came to Bruce Castle (still standing in Lordship Lane) in 1516 to meet his sister Margaret. So would locals such as Luke Howard, the meteorologist who named the clouds; Rowland Hill, who introduced postage stamps; and Dr. Barnardo, the philanthropist of children’s-homes celebrity.

Last weekend offered a new “turnament” to beguile the borough, complete with a cumulonimbus of petrol bombs and a “democratic shopping” bonanza during which TVs, mobile phones, jewelry, carpets, reading glasses, and chemist’s products were looted by trolley-pushing activists “protesting” the “injustice” of Mr. Duggan’s “martyrdom.” They can ponder on philosophical matters while they admire their thick gold chains or apply their new hemorrhoid ointment—unless they’re like the dissatisfied client overheard talking of returning to the branch of H&M she had helped ransack in order to exchange her booty for better. If only she had been as wise as the other after-hours customers spotted trying on their new trainers before making their purchases—sorry, escapes!

On Sunday night, there were smaller disturbances in nearby Enfield, Walthamstow, and Dalston, in the center of town at Oxford Circus, and south of the river in Brixton—apparently organized by BlackBerry Messenger (recommended retail price £175) and reached in new Golf GTIs (£15,685). Not everyone was so prepared, though—some Brixton locals were reportedly surprised that looters asked them for directions to shops and banks.