The Trouble With Ta-Nehisi 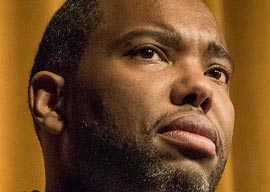 The newspaper that prints only what fits its piously fraudulent agenda, The New York Times, has reviewed a book by one Ta-Nehisi Coates twice, both times showering it with praise that would make a Hollywood name-dropper blush. A biweekly that mostly reports on food and gay porn, New York  magazine, put the scribe on the cover, and the author has been lionized like no other since, I suppose, Victor Hugo back in the old country. (There is not a town or city in the land of cheese that doesn”t include a Rue Victor Hugo.) Needless to say, Ta-Nehisi (sounds as exotic as Taki) Coates is a black American who hates whites and sees no difference between white cops who shoot unarmed black people and the police and firefighters who lost their lives being first responders to the Sept. 11 attacks. “They were not human to me.” Attaboy, Ta-Nehisi”if talent won”t get you up the greasy pole, try rage, and the Times will give you a great review, quasi-porn gay magazines will put you on their cover, and your employer, The Atlantic, will send you all-expenses-paid to Aspen to mix with billionaires and neocons who will kiss your black ass”metaphorically, that is”and then some.

The fact that America has twice elected a black president seems to have escaped this dude. He is still back in the bad old days, before the War Between the States. Actually he writes the way, I suppose, a slave used to think, and it’s doing him and his career good. One Times reviewer, a Japanese-American female who has never favorably reviewed a single white heterosexual American male writer, had a multiple orgasmic experience writing about this short polemic by a smart dude who knows how to play today’s culture and manipulate white guilt like a lion tamer in a circus. Oh, yes, I almost forgot, I read somewhere that Ta-Nehisi had taken umbrage with Bill Cosby because of the latter’s warning to young blacks that they should assume their responsibilities, stay in school, and try to have less children with mothers younger than 14 years of age. (This was before Cosby got into trouble with women, a fact that somehow tickles my curiosity. Would all those females have come forward if Cosby hadn”t read the riot act to black Americans? I”m not so sure.) Well, all one can say is he would, wouldn”t he?

“Ta-Nehisi Coates reminds me a lot of Al Sharpton, except the latter is a sharper dresser.”

During a debate with a white mayor in Aspen, whitey brought up black-on-black crime, but immediately recanted and apologized. We don”t talk about such things in polite society, especially not in front of billionaires who come to Aspen to rub elbows with their own kind. The ludicrous Kakutani reviewer describes Coates” rubbish as “profoundly moving.” Here’s a short example of his profundity: “The plunder of black life was drilled into this country in its infancy and reinforced across its history, so that plunder has become an heirloom, an intelligence, a sentience, a default setting to which, likely to the end of our days, we must invariably return.”

Ta-Nehisi Coates reminds me a lot of Al Sharpton, except the latter is a sharper dresser. The Reverend Al never mentions that close to 75 percent of all black children in America live in single-parent households. Ta-Nehisi and Al ignore the fact that not snitching on criminals in their midst is the norm among young blacks in ghettos. The cops are the enemy, not the murderers and drug dealers among them. Treating academic achievement as Uncle Tomism is the depressing cultural illness that has spread unchecked throughout much of black America. And it’s people like Coates, feted by dishonest hypocrites like those working at the Times, who help perpetuate this depressing climate. The vacuum of responsible leadership among blacks in America is bad enough. People like Coates, the Sulzbergers, and the Kakutanis help make it a triumph for felons and failures.

If the proverbial Martian happened to choose to land in America for a bit of rest and recreation, and also happened to pick up The New York Times to wrap a hot pastrami sandwich in and began to read it, you couldn”t blame him or her if their antennae fell off. They would report back home that only blacks, gays, transsexuals, and transgenders live peacefully in the land of opportunity, the rest being white murderers who kill blacks and gays all day and night long.

It is very depressing. Black schoolkids are accused of acting white if they”re seen as trying, while black leaders are mostly hustlers working the system while cheerleaders of these hustlers like the Times urge them on. Whatever happened to pride and self-determination? If white people were doing to blacks what black people are doing to them, there would be rioting from coast to coast and a race war. That’s what Ta-Nehisi should be writing about, not the bullshit that shows America in 2015 to be the America of 1861.