The True Measure of JFK’s Greatness 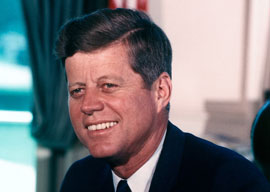 Everyone’s doing it, so I might as well jump in also. After all, I knew so many of the people involved, including JFK and his widow Jackie, and—sorry for the name-drop—even actor Rob Lowe, who plays the slain president in the film that’s coming out for the 50th anniversary of JFK’s assassination.

I only met Senator John Kennedy once—a year before he became president—at a party thrown by Alice Topping, a society dame of the time. The first and lasting impression was of his charisma and good looks. He was 42, the room was full of beautiful women, but he did take a minute or two to ask me about school and my plans for the future. It was not any different than most politicians’ chatter, but with a difference. None of that greasy Bill Clinton stuff, more man-to-man chitchat with lots of jokes about our wandering eyes. I never saw him in person again.

“He was an insecure president with great charisma and personal courage, but he only appears great in comparison to the awfulness of LBJ and George W. Bush.”

Like everyone else alive and out of a crib on November 22nd, 1963, I remember it well. I was going to the 21 Club for lunch, and 52nd Street traffic had stopped while people listened to car radios. We all know the rest. What people did not know was the unquestionable sleight of hand worked by Jackie while arranging the details of the funeral, even having rehearsed her little boy’s salute as his father’s cortege passed. Despite her Medea-like rage and grief, she went over the list of those invited to attend and added her personal favorites, including Ari Onassis and J. D. Salinger. The widow quickly put some distance between herself and the rowdy Irish bunch of her husband’s brood except for Bobby Kennedy, who was perceived as the realist to JFK’s romantic, but who in reality was the romantic to the realist his older brother was. Jackie wanted center stage and got it in spades. Five years later she became Mrs. Onassis and that’s when the high life began.

Fifty years down the road, what I find annoying are the conspiracy theories that have never really ceased. One graceful act Jackie never got credit for was the letter in blue stationery she wrote to the widow of Officer Tippit, the policeman Oswald murdered by pumping four bullets in him before going to the movie house where he was finally arrested. She wrote how she worried that in their grief for the president Americans might forget the officer’s death on the line of duty, but that she (Jackie) never would.

That’s as graceful and profoundly moving as it gets. The conspiracy theorists were mostly motivated by you-know-what. Mind you, there were so many loose ends: exit wounds that could not have come from the book depository, unexplained actions once the president had been taken to the hospital, etc. Still, I am among those who see a sole assassin who got lucky, and I am amazed that Onassis, Richard Nixon, and LBJ were not dragged before the courts as potential conspirators. (A fabulist by the name of Evans–a Brit, of course–blamed Onassis for RFK’s murder 40 years after the fact, and his outrageous invention managed to sell a hell of a lot of bull—sorry—books.