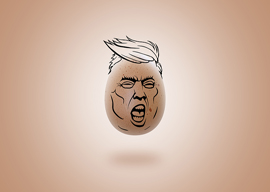 NEW YORK—Why is it The Trump Era?

Why do I read this forty times a week?

I’m not sure I’m ready to give this guy his own era.

There are actually only three eras: Paleozoic (which lasted 292 million years), Mesozoic (185 million), and Cenozoic (65 million and counting).

Which is why, when we use the word as a metaphor, it’s supposed to denote something mind-blowingly unique, defined, and long-lasting—the Elizabethan Era, the Victorian Era, the Colonial Era, the Revolutionary Era, or, since the term is so beloved by sportswriters, the Babe Ruth Era, the Vince Lombardi Era, and—a rare negative one—the Steroid Era.

The first problem with a “Trump Era” is that the guy hasn’t even been in office for a full year. So if he gets hit by a truck tomorrow—or gets a spiked high heel through the heart, like the stingray that killed the Crocodile Hunter—it would be hard to justify the 9 million articles written in 2017 using “Trump Era” as a term to describe…

“Remarkably, the very first use of ‘Trump Era’ occurred within one hour of the man winning the election.”

But back to my original point: Since he’s unlikely to be president beyond Jan. 20, 2021, isn’t “Trump Era” a gun-jumping assumption likely to require an explanation of why this was an era and not, say, The Trump Interlude or The Trump Second? I would suggest using The Trump Nanosecond, but I think William Henry Harrison has a prior claim. In 1841 Old Tippecanoe delivered his inauguration speech in a snowstorm, droned on for an hour and 45 minutes, contracted pneumonia, and suffered the poetic justice of death 31 days later. By calling this The Trump Era, it’s as though the press is writing five-volume biographies of William Henry Harrison’s presidency.

Then there’s the metaphysical problem with naming an era after Trump—namely, that he doesn’t really believe in anything. This turns “Trump Era” into a basket term that can be positive, negative, political, social, polemical, sneering, pompous, patronizing, or simply a convenient way of describing the year 2017. Curiously, the die-hard supporters of the man don’t use the term. They love to gloat about Trump’s victory, but it’s not something they shoehorn into historical patterns—after all, they could go ahead and call it The Trump Eon, which would include all the eras. Many of them remind me of the New York City cops who brutalized Abner Louima with a broom handle in the ’90s while shouting, “It’s Giuliani Time!” I could picture this sort of joyful threat on a placard at any Trump rally: “It’s Trump Time, Baby!” Present tense. Now. History be damned.

But I think I’ve figured it out. I’ve read quite a few of what I call 11/9 articles—because they started on the day after Trump’s victory. They’re just like 9/11 articles in that they all begin with the assumption that “The world has changed and will never be the same.” And, remarkably, the very first use of “Trump Era” occurred within one hour of the man winning the election. Ross Douthat of The New York Times filed a column called “The Trump Era Dawns” at 3:07 a.m. on election night.

Hence a clue to the term’s purpose. It means “barbarians at the gate.” It’s always used in a me-vs.-them context, with the “me” being the author of the article and “them” being a vast amorphous enemy signified by the word “Trump.” That’s the Trump Era in a nutshell. Otherwise you can’t explain applying the term to subjects that Trump himself obviously knows nothing about. “Semiotics in the Trump Era”? I don’t think so.

What this means is that the universal adoption of “Trump Era” by intellectuals and journalists bodes ill for any kind of gathering of the clans. The term is entirely pejorative and implies a disease called Trumpism that must be stamped out or—since it’s an era and not a stage—stoically endured. No one who uses “Trump Era” is saying, “Now that the people of West Texas have spoken, let’s pay more attention to their needs and beliefs so that the great melting pot of America can be reunited.” They’re still deplorables. They’re still expendable.