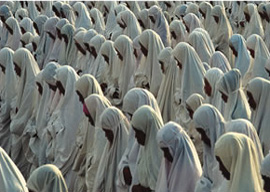 Every time Islam pokes its head out of its towel, I get nostalgic. Oh, women in Egypt were sexually assaulted for protesting sexual assault last week? Ahh, that takes me back to the halcyon days of the Wild West. Pardon? Did you say a Muslim man screamed, “God is great!“ before throwing his wife’s head out the window in Berlin earlier this month? Ho ho, that takes me back hundreds of years to the old witch hunts in that fun little college party town called Salem. What’s that? Homosexuality is still a capital offense in Saudi Arabia, Iran, Mauritania, northern Nigeria, North Sudan, and Yemen? Ah, sweet old 16th-century England. When I was told yet another woman was stoned to death in the Sudan a fortnight ago, I was catapulted back to the way we were in the 4th century.

Peering into Islam is like picking up your great, great, great, great, great, great, great, grandfather’s diary. Muslims are simply way behind us. They”re merely slower than us””retarded,” if you will. We see the same thing happening in Mexico. We assume their drug wars are evidence of the natives gone savage, but they”re really just struggling to fill the vacuum Pablo Escobar left behind. We went through the same growing pains during Prohibition.

The Turd World will catch up with us in a hundred years, so leave “em be and let “em have at it. We need to get out of the Middle East because you can”t fast-forward progress. Let nature run its course.

Wait”I just saw footage of Iran in the 1970s before the fundamentalists took over. Sexy women in miniskirts were getting science degrees and driving cool cars. I can”t tell who’s gay or not, but the scene is virtually indistinguishable from 70s New York when our mayor was gay, so I”m guessing things were relatively groovy. Education was free for women in Iraq back then, too. Iraqi women today are back to where they were 100 years ago. In fact, the entire Arab world seemed way more modern half a century ago. They”re not slowly catching up to us. They”re going backward!

There are many theories to explain this regression. I posited here that it was from their extensive inbreeding. Irshad Manji takes a gentler approach (for which she received death threats) and insists that extremists hijacked Islam and bastardized it into a totalitarian ideology. Before now, I”d accepted both theories as plausible. Eventually, Islam would get over inbreeding, reclaim their religion, and become civilized.