The Turkey Who Cried Wolf 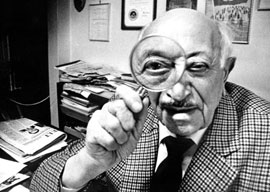 Here’s a funny coincidence. Just as Netanyahu is hyperventilating against the interim deal Uncle Sam has struck with Iran in Geneva, a poster campaign by the Simon Wiesenthal Center in Berlin intended to identify aging Germans who might have participated in Nazi crimes has produced more than 3,000 posters in cities all over Germany. “Late But Not Too Late” is what the signs say, with a concentration camp in the background. Mind you, the war has been over since 1945, the guilty ones have been punished, and reparations in the hundreds of billions of dollars have been paid to the families and descendants of the victims.”¨
Not enough, according to some. Based on tips, four very old people are being investigated, including a woman. Two hundred and eighty-five calls have been placed to a toll-free number accusing 285 people. Most of the calls were placed in Germany and Israel.

“It’s been 68 years since World War II ended, so the Simon Wiesenthal Center has used up its good offices.”

It’s been 68 years since World War II ended, so the Simon Wiesenthal Center has used up its good offices. It needs money and what better way to get it than to cry wolf? Anyone still living who might have been involved has to be in his or her nineties. Even worse for those accused, they most likely were extremely small cogs in the machine and probably were forced to serve an evil practice and cause. In fact, I think this is just a shakedown at best, a propaganda play by the ruling Likud party in Israel to regenerate pity for the long-suffering Jewish people. The latter, and not of late, incidentally, are no longer suffering but making others suffer, namely the Palestinians. Netanyahu knows only one thing: pressure. He has never tested Palestinian goodwill, has never taken a chance on Palestinian good faith, and has never given a chance to Palestinians to show that they are, like most people, peace-loving and willing to negotiate.”¨
Instead, extremist groups such as Hamas are a godsend to him, and he plays their over-the-top rhetoric to his advantage time and again.”¨”¨As Roger Cohen wrote, diplomacy involves compromise and risk. The hardliners of Israel don”t even know how to spell the “D” word. Now they have stirred up a non-event in Germany and Austria by having any person with a grudge against anyone anywhere to use a toll-free number and accuse anyone of being a concentration-camp guard. So I shall start the ball rolling and accuse a certain Efraim Zuroff of having been involved in those dastardly crimes. He is, by the way, the director of the Israel office of the Wiesenthal Center. But I do it on Taki’s Mag rather than using the toll-free number, which is the coward’s way out. Zuroff is obviously not guilty of the crimes,  but neither are most people who will be accused by those informers using the toll-free system. I know a rough hustle when I see one, but this is a new low as far as the Likudists are concerned.