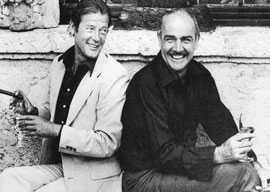 In the movie business, conventional wisdom has it that to succeed at the box office a film must include profanity, obscenity, blood, gore, blasphemy, and, of course, lots of sex. There’s only one little problem with this theory. Empirical data illustrates that the opposite is true. Clean, wholesome family affairs generally do much better at the till. Yet motiveless violence and crimes committed at random continue to be the order of the day.

The awful Quentin Tarantino leads the pack among the talentless directors now forming our culture. His dialogue is mostly mindless, he makes no distinction between right and wrong, and most of his characters wallow in violence and brutality. His point is slaughter for slaughter’s sake, and in slow motion to boot, in case we missed any of the gore.

“The pattern of honoring ugliness, violence, and brutality in films is a recent phenomenon.”

The pattern of honoring ugliness, violence, and brutality in films is a recent phenomenon. The message seems to be that portrayals of cruelty and dementia deserve more serious consideration and automatic respect than any attempts to convey nobility or goodness. In the past thirty years the entertainment industry’s most influential leaders have demonstrated a powerful preference for the perverse. Even the stars have followed this pattern. During the golden era of Hollywood”the 1930s to the 1960s”stars were different from you and me. They looked, talked, and lived better, and had replaced the millionaire robber barons as the dream figures in the popular imagination. Now they look as grubby as the characters they portray on the screen”or better yet, like homeless people. They talk like thugs and act like drug dealers, menacing fans and waiters alike. Most are incapable of stringing a sentence together without the word “like” repeated ad nauseam.

Which brings me to the point of my story.

I mostly live in Gstaad, Switzerland, an alpine village that turns ugly only during Christmas and the month of February. The rest of the time the extremely rich people who own chalets here are away screwing their fellow man elsewhere. Two men”both of whom I met and became friends with in Gstaad”have been knighted by the Queen. Both played 007 and both are gentlemen of the old school: Sir Sean Connery and Sir Roger Moore, the latter being a friend of long standing.

Let’s start with Sean, the first James Bond. The irony is that the producer Cubby Broccoli wanted Roger Moore to play Fleming’s hero, but Roger was unavailable and under contract playing another Bond-like G-Man. So the unknown Connery got picked, and you know the rest. Sean Connery happens to be a very good actor. He played Bond with confidence and a sense of humor. He openly womanized, chased the fairer sex, and ignored the outraged cries of hairy feminists who thought him a male chauvinist pig. “Proud of it,” he’d mumble. In Dr. No, the first Bond picture, women swooned while he flirted with secretaries, bedded easy women, and ended up with Ursula Andress, a Swiss lassie who emerged from the sea and into his powerful arms. He played Bond like a man, never questioning himself because he knew he was on God’s side.

Connery told me a funny story about that particular movie. They were shooting in Jamaica, and the master himself, Noel Coward, a long-time resident of the island, came down for a look-see. He introduced himself to Sean and invited him to dinner that evening. Connery accepted with alacrity. Upon arrival he noticed the dinner table was set for only two. He nevertheless sat down, eager to get to know the legend that was Sir Noel. The first question from his host was, “Are you homosexual?”