The Two Faces of Michelle Obama 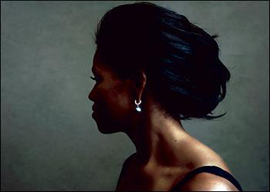 Two first ladies will hit the campaign trail for Democrats this month: Michelle Obama, champion of ordinary Americans, and Michelle Obama, money-grubber for the liberal elite. The actions of the second Michelle will tell you all you need to know about the lip service of the first.

Mrs. Obama kicked off her electioneering with an online “grassroots” appeal to individual donors coordinated by the White House political arm Organizing for America (OFA). With humble heart, the president’s wife asked followers (“the folks who voted to make change real”) to scrounge up “$3 or more to help grow this movement.” The first lady announced an eyebrow-raising pledge program by anonymous donors (so much for transparency) who will “match” every contribution made before Nov. 2. She identified the “Michelle Match” participants as “teachers and firefighters, truckers and nurses”—which may be Obama code for Big Labor and its $88 million midterm campaign war chest.

Remember: Obscuring funding sources is par for the course Chez Obama. OFA is run by David Plouffe, the Chicago wunderkind of astroturfing and a senior adviser at AKPD Message and Media. That’s the public relations firm founded by fellow Chicago guru and White House senior adviser David Axelrod, who has long specialized in disguising special-interest cash to create the illusion of grassroots support.

While she panders publicly to the hoi polloi, Mrs. Obama will shake the money tree behind closed doors for some of Washington’s wealthiest Democratic officeholders.

While she panders publicly to the hoi polloi, Mrs. Obama will shake the money tree behind closed doors for some of Washington’s wealthiest Democratic officeholders. Next week, she’ll return to her native Chicago to raise money for Democratic U.S. Senate candidate from Illinois Alexi Giannoulias. The president drummed up $1 million for the beleaguered state treasurer in August and will himself fly back to Chicago on Friday to raise more money for the scandal-plagued Giannoulias—who is locked in a tight race with moderate Republican challenger Rep. Mark Kirk.

Giannoulias is the basketball buddy of Mrs. Obama’s husband and brother. He worked for his family’s now-defunct subprime sleazeball financial institution, Broadway Bank. Reminder: This is the place where Obama parked his 2004 U.S. Senate campaign funds. It’s the same place where a mutual friend of Obama and Giannoulias—convicted Obama fundraiser/slum lord Tony Rezko—used to bounce nearly $500,000 in bad checks written to Las Vegas casinos. And it’s the same place that lent an estimated $27 million to mob crooks Michael “Jaws” Giorango and Demitri Stavropoulos.