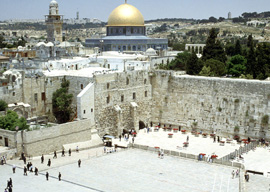 Try to see it from the other guy’s point of view. He may be wrong. He may be, at least partly, right. Today, I am trying hard to see life from the point of view of an Israeli settler in the occupied West Bank. I have known a few, including one named Benzion Gruber, whom I liked. Benzi Gruber was the kind of man you would want beside you in a fight. It was not because he was a good fighter, which I suspect he was, but because he wouldn’t desert you.

Benzi was a colonel in the armored corps. Many of the men under his command told me he went out of his way to support them. More than one remembered sitting in a bunker somewhere in the West Bank, cold and in the dead of night. To make matters worse, it was their birthday. Suddenly, out of the dark, they would see Jeep lights approaching. Out of the door came little lights from birthday candles on cakes hand-delivered by Benzi Gruber.

Benzi, whom I have not seen in about eight years, lived in a settlement on land expropriated from its Palestinian owners. He had decent and intelligent children, and his family was hospitable when I had dinner at the house. It happened to be January 23, 2002, when I turned fifty-one. I’m not sure who told Benzi, but he came into the house with a birthday cake that had five candles plus one. I try to see the world through Benzi’s eyes.

When I covered southern Africa in the late 1970s, I tried as well to see Rhodesia from the white settlers’ point of view. They had a lot to lose, although they had stolen the country from its inhabitants, enacted laws to exclude blacks from the most fertile land, kept the indigenous population from power, and went to war to prevent granting the vote to the majority. When I look at the crimes committed now by Robert Mugabe—and they are many—I recall that rule by violence was also paramount to Cecil Rhodes’s conquest of Mashonaland and Matabeleland in the late 19th century. Mugabe has continued the system, mistreating not only the whites but also most of the country’s blacks. Ian Smith and his white followers, however much they wanted their white society to survive as they knew it, were wrong. Their war to prevent democracy was not merely immoral. It was self-destructive. In making military and police force the sole arbiter of disputes, they insured democracy would be stillborn.

My fear for Benzi Gruber, his family, and the other 300,000 settlers in the West Bank is that they are destroying a country that I know they love. They may be afraid of withdrawing from the West Bank. Some have a biblical attachment to the land, and others are taking advantage of government subsidies and tax breaks they would not enjoy in Israel proper. To preserve the settlements, they insist that the pre-1967 borders are indefensible. Ephraim Sneh, a former deputy defense minister and retired general, put that lie to bed in a recent New York Times Op-Ed that said a “security package would make the 1967 lines defensible.” In other words, two states—an independent Israel and an independent Palestine—are safer than one.

The Arab League decided last week to present the United Nations General Assembly with a resolution that the US and Israel have long been dreading: for UN recognition of an independent Palestinian state in the West Bank, Gaza, and east Jerusalem. Both the US and Israel would be wrong, in law and in their own interests, to oppose Palestinian statehood this September. UN General Assembly Resolution 181 of 1947 called for two states in the British Mandate of Palestine. The Arabs made the mistake of opposing partition. Most Jewish leaders embraced it. Remember, they embraced a resolution that called for two states, not one. That resolution became Israel’s birth certificate when, on May 15, 1948, it declared statehood. For the Palestinians today to call for their own state means not only that they accept partition, but that they accept Israel’s birth certificate—its “right to exist.” Israel and the US should embrace world recognition of Palestinian statehood and thus the Palestinian state’s acceptance of Israel.