The Tyrant and the Rebels 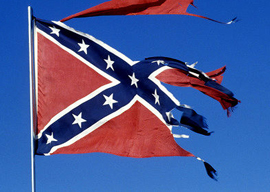 Once there was a ruler who held his vast land together with an iron fist. For decades the people in one of his disparate regions had pursued peaceful methods to codify their way of life as it fit into the national fabric. Alas, their efforts were to little avail.

Their regional faction was made to bear the brunt of unfair taxation. They suffered lesser development than the country’s favored spots, which were located closer to the ruler himself. Ultimately, the ways in which they differed from the majority population made them the subject of gross and unfair vilifications.

After many efforts at reconciliation, there was no alternative but to dissociate themselves from the ruler who persecuted them. Although they attempted to do even this by peaceable means, they were declared to be in rebellion.

What followed was a protracted conflict during which each side appeared at various stages to have victory within its grasp. Battles raged all along the coastline. At one juncture, it seemed that the capital would be taken and the despotic ruler would be driven from power once and for all.

The devious man pursuing his aim of subduing the restless populations made no pretense of upholding the duties of his office. Freedom of speech was a thing of the past. Many who questioned his motives were imprisoned, sometimes with no explanation whatsoever.

“Standing too close to either side in a conflict may be morally comforting, but it doesn”t ever improve the view.”

The rebel fighters sought international intervention. European powers weighed in with observers on the ground, statements of support, and some actual armaments.

However, the rebels” dream of a nation in which they could practice their own way of life without interference from those who did not understand (and who even despised them for it) was simply not to be.

In the final days of the conflagration many needless atrocities were committed. Wholesale burning of many cities ensued along with the merciless plunder and rape of civilian populations who had played little to no actual part in the military campaigns.

Homes were destroyed. Lives were ruined. One of the major population centers of the day was razed to the ground.

Its name was Atlanta.