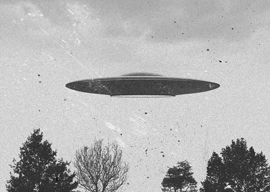 Former Senate leader Harry Reid (D-NV) proudly claims to have slipped $22 million into the Pentagon’s “black” budget a decade ago to fund a secret Pentagon department to keep an eye on the UFO Menace. The Advanced Aerospace Threat Identification Program, the former DoD agency started by the Senate majority leader, released video of a UFO said to have been filmed in 2004 by F-18 pilots sent to track a mysterious paramecium-shaped dot.

Reid says he launched the Pentagon office without needing to tell any fellow members of Congress other than the octogenarian Lions of the Senate Daniel Inouye (D-HI) and Ted Stevens (R-AK), both of them now deceased.

So maybe there really is an Inner Party of all-knowing insiders after all? Perhaps your average Al Franken-level senator isn’t clued in to the really big secrets, but if you come from a small-population state without much political competition and keep getting reelected, finally they induct you into the club within a club that worries about the things that really matter, such as UFOs?

Or maybe flying saucers are a particular concern to constituents in Nevada (home to the secret Area 51 test-flight base), along with Hawaii and Alaska, home to extensive military radar? (My brother-in-law spent a few years in Anchorage keeping an eye on Soviet Bear bombers testing American air defenses.)

Or perhaps senile dementia is a bipartisan phenomenon?

A decade ago, a Capitol Hill technician who spent time around senators before and after the cameras were turned on told me that Reid, a former amateur boxer, was a punch-drunk old man propped up by his staff.

I have no idea if this was a palpable libel or something covered up by the Democratic-leaning press. As we are seeing with Weinsteingate, there are a lot of open secrets about the powerful that aren’t that open to the public. Heck, President Obama arranged for his own daughter to get an internship at…Weinstein Films.

“My guess is that the UFO craze that began in 1947 had something to do with the lavish postwar investment in aerospace R&D.”

Still, it’s worth noting that the UFO craze that began in 1947 with pilot Kenneth Arnold’s sighting of “flying saucers” over Washington State, followed shortly by reports of the “Roswell incident” in New Mexico, was by no means wholly demented.

It tended to be fueled by reports from seemingly reliable figures, such as pilots and politicians. For example, future president Jimmy Carter saw a curious series of lights in 1969 that he called a UFO.

Americans spent a lot of time scanning the skies following their collective failure to notice what was coming out of the clear blue sky at Pearl Harbor on Dec. 7, 1941.

For instance, America’s top aerospace engineer, Kelly Johnson, the founder of Lockheed’s Skunk Works, saw a curious phenomenon in the western sky on Dec. 16, 1953, that he thought was a flying saucer. The next day, he ran into the crew of a Lockheed Constellation that had been remodeled into a prototype Navy Airborne Early Warning airplane. They had seen the same inexplicable glowing shape. They then all filed detailed reports with the Air Force.

One thing to keep in mind is that for the first couple of decades of the postwar era, life elsewhere in this solar system seemed scientifically plausible. It was widely believed at the time that assuming there was anything unique or even unusual about humanity was a reactionary religious prejudice. It was often asserted that Copernicus had displaced human beings from the center of the universe and therefore it was undemocratic to assume that we didn’t have to put up with countless other intelligences, some of whom no doubt would be more advanced than us.

As physicist Enrico Fermi asked Edward Teller in 1950, “Where are they?” The pressing question was considered to be less how much evidence is there for aliens visiting us than why is there only a little evidence for aliens?

In the standard science-fiction model of the mid-20th century, Mars was envisioned as a sort of Tibet, a desiccated thin-air planet with a civilization high in philosophy but low in sex drive. Venus was assumed to be Mars’ opposite, a swampy Congo of teeming but barbaric life.

The unexpected likelihood that humans were alone in the solar system suddenly rose during the mid-1960s with the first interplanetary probes’ disappointing findings. A 1965 U.S. Mariner fly-by of Mars lowered hopes that the Red Planet was habitable. And not until a Soviet Venera crashed into Venus in October 1967 was it definitively proved that Venus was too hellishly hot to support life.

So, outer-space visitors would have had to come from planets vastly farther away.

This raised questions of how they could go fast enough to get to Earth. And to get here in any reasonable amount of time, they’d not only have to accelerate to an implausibly high speed, they’d have to decelerate sharply upon arrival. This means they’d have to take half their fuel with them in order to brake, which is a daunting requirement.

For example, earlier this year a bizarre 800-foot-long and 100-foot-wide object from outside the solar system, ‘Oumuamua, zipped past Earth at a velocity of 59,000 mph. That’s only fast enough to travel one light-year every 11,000 years (the closest star is over four light-years away). But it’s still going fast enough to carry whatever it was on its way out of the realm of our sun’s gravity.

In the postwar era, it was assumed that the difficult engineering challenges of going faster would be progressively overcome, just as humanity had gone from inventing the steamship to landing on the moon in six generations. But nothing much in terms of faster travel has happened since 1969.

Another aspect of the postwar UFO craze that’s easy to forget is that the engineering mindset was not wholly divorced from appreciation for the paranormal. The aerospace, science-fiction, movie, and New Age worlds were by no means wholly distinct. All tended to flourish and overlap in Southern California.

For example, M.D., sci-fi novelist, and film director Michael Crichton claimed in his memoir to have witnessed numerous examples of Uri Geller-style telekinetic spoon bending at house parties given by Lockheed engineers.

Likewise, a bizarre but now forgotten fad that flourished in Southern California in May 1980 was centered in the aircraft and movie suburbs such as Burbank. During the last two weeks of that month, the Ventura Freeway was jammed with suburbanites on their way to pyramid power parties. It was like a Ponzi scheme, except with mystical pyramids actually made out of prosaic wire and fabric.

You’d go over to a higher-up’s house and sit with him under his pyramid while you gave him all your cash in return for your very own kit for building a pyramid out of coat hangers and cloth. The Ancient Egyptian emanations from his pyramid would ensure that you’d get even more cash back from the suckers you’d recruit to buy your pyramid kits from you while sitting under your pyramid.

This was a multilevel scam that was hard for authorities to debunk as a pyramid scheme because it came pre-debunked as…a pyramid scheme! Admittedly, this sounds like the nutty pyramid scheme that wrecked the nascent Albanian capitalist economy in 1997, but it really did happen in L.A. just 37 years ago.

A year or two later, the Reagan administration put all the aerospace engineers back to work in the defense buildup. Perhaps not coincidentally, the demand for books about spoon bending and pyramid power simultaneously cratered.

Finally, my guess is that the UFO craze that began in 1947 had something to do with the lavish postwar investment in aerospace R&D.

The scale of Cold War spending can be hard to grasp. Recent research, for instance, suggests that Jimmy Carter’s UFO was the result of the Air Force launching two rockets from Eglin AFB that evening to release exotic gases into the upper atmosphere. Why? I don’t know, but if you had that kind of budget, why wouldn’t you rocket weird substances into the sunset to see what they look like?

The gifted but doomed aerospace firm Avro Canada spent the 1950s building a genuine jet-powered flying saucer, getting it a few feet off the ground by 1959.