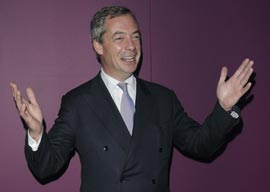 As May 7th bulks ever bigger on the political horizon, the UKIP omnibus has developed serious rattles. As the campaign pounds punishingly on, the insurgents” inexperience is starting to show, and it will take daring driving to stay on the road. And they have come a long way already.

UKIP was founded in 1993, as the Anti-Federalist League – even the name radiating amateurishness – by Alan Sked, a sincere but politically unskilled academic. Another founder member was one Nigel Farage, a former City trader who had left the Conservatives, disgusted by the Maastricht Treaty. From the outset, the new party was a coalition of the alienated – former Thatcherites, cultural conservatives, colourful eccentrics, and a sprinkling of ex-Labour Eurosceptics. The party also attracted a few respected academics like Antony Flew, and celebrities like Joan Collins, Patrick Moore and Leo McKern. This ensured slightly better media treatment , and gave a faintly glamorous sheen to an otherwise joyless single-issue group.

“UKIP is not the only small party which may have a disproportionate influence in the next parliament, but it is the only one eliciting real hatred.”

Party ranks were dominated by lower middle-class suburbanites, predominantly middle-aged, including many old-school Anglicans, British Israelites, monetary reformers, conspiracy theorists, and proudly philistine bungalow-dwellers for whom World War II was not over. Party events were often characterized by monologues – which sometimes came from the floor rather than the podium – about why we should never have gone decimal, or Ted Heath’s iniquities, or “political correctness gone mad”, or the “Fourth Reich” supposedly rising in Brussels. The EU, many UKIPers still believe, is a front for a Germany which has never given up its Hitlerlite ambitions. Many UKIPers advocated closer ties with America and other Old Commonweath countries as a counterbalance to the EU, even though they disliked modern America – in fact, everything that had happened since about 1950. Party manifestos were a hotchpotch of inadvertently amusing ideas, like ensuring a dress code for taxi drivers – Nigel Farage admitted recently that the 2010 manifesto was “drivel” – not that it mattered because they were rarely read.

The party seethed with resentment against the Tories (excluding Maggie and, especially, Enoch). The party was a refuge for industrious and provident middle-class men and women who felt let down by the Conservative Party, and were profoundly at odds with modern Britain without quite knowing why. They liked the armed forces, G&Ts, egg and chips, Classic FM, and Top Gear – they loathed political correctness, narcotics, modern art, modern music, foreign food (except curry), and anything to do with protecting the environment. One activist informed me he had been politicized when a Messerschmitt strafed his pram – and another was mystified when I said he should not have cut down an old Andalusian orange grove to make a caravan park for expats. They were mostly good people, if not always scintillating conversationalists.

But they had identified an important and ignored issue, and worked impressively hard even though their party attracted derisory support – after every bad result erupting in especially unpleasant bloodletting. In fact, they often erupted in especially unpleasant bloodletting even after good election results. Their dedication started to pay off in 1999, when the party won three seats in the European Parliament, and began to figure in local government. It improved upon that in 2004, 2009 and again in 2014, although it did not break through at Westminster (excluding three peers who defected from the Conservatives) until late last year, when MPs Douglas Carswell and Mark Reckless resigned from the Conservatives and won their constituencies again for UKIP. Now, it is on course to win between four and six seats at Westminster – potentially making them kingmakers if the result is close. The party has been going through tortuous modernisation as it attempts to broaden both its leadership base and its appeal to Labour voters. The latter process has been quite successful, the former less so, with the party still dominated by Farage’s abounding personality. This is far from ideal, as he has had several near-death experiences, and is noted for smoking and drinking. He must be conscious of mortality, because he has published a kind of memoir – he is certainly conscious of the possibility of failure. He has said he will step down as leader if he fails to win in Thanet South, where he is standing against an ex-UKIPer, in what will be one of the nastiest contests. The party is also heavily dependent on a few donors, and was down to its last £6,000 last year.