The Unbearable Dullness of Judd Apatow 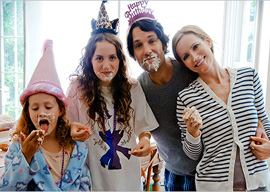 This Is 40 is one of those rare films that is so unforgivingly awful, it’s worth watching. What was apparently intended to be a quirky peek at Judd Apatow’s real-life family is so universally hated, it’s actually bringing people together.

The first time I saw the movie, I fell asleep. As I drifted off, I remember my pregnant wife punching the couch in a rage. She was furious she had stayed awake this long and was going to be tired all day for a film that was so ponderous, it makes Wuthering Heights look like a Tweet. The second time I saw it, I was with pals and instead of pounding the couch in a rage, we stared at each other with golf balls for eyes and shrieked, “Where’s the fucking plot!?” It was fun.

“I’m pretty sure the only people who can relate to these characters are the characters themselves.”

We soon realized that watching this film isn’t a chore. It’s a challenge. Like trying to finish Sean Penn’s essay about Hugo Chavez, making it to the end of This Is 40 was a sign of macho endurance. After the film was finally over, we sat around and discussed all the things we would rather do than watch the film again. I came up with: give a homeless man a very meticulous haircut, step on a cat barefoot until it suffocated, and smoke seven cigarettes back-to-back (I don’t smoke).

Virtually everyone I spoke to about this film cannot believe this celluloid turd is from the same guy who created the groundbreaking comedic masterpiece Freaks & Geeks and then went on to do The 40 Year Old Virgin, Superbad, Pineapple Express, Forgetting Sarah Marshall, Get Him to the Greek, Wanderlust, and Bridesmaids. All of those are so fun to watch, they’re almost action movies.

This is why it’s so shocking to see him create the 133-minute torture chamber that is this film. As Richard Roeper pointed out, the torture porn Zero Dark Thirty crammed in ten years of tracking bin Laden in less time. And bin Laden was more likeable. I’m pretty sure the only people who can relate to these characters are the characters themselves. Hey non-overweight husbands, don’t you hate it when your wife screams “Stop eating cupcakes” so often you have to eat sweets out of the garbage? Hey dads, aren’t you annoyed by how often your wife refuses to go to a “Western” doctor when your daughter has an excruciating ear infection?