The Undead & The Brain-Dead 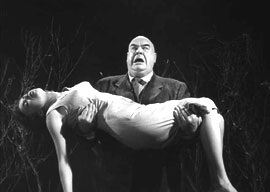 Mass news reports last week of an impending “Zombie Apocalypse” proved that while the apocalypse may not have arrived quite yet, there are plenty of zombies waiting for it to happen.

Zombies, you see, eat human flesh, and though one need not be “undead” to be a cannibal, many of the glass-eyed living dead who devour zombie movies and zombie video games seem to assume that anyone who eats human flesh is a zombie. What might one call such dead-eyed husks of human beings? It would be inaccurate to label them the “walking dead””they’re more like the “sitting dead.”

Over Memorial Day Weekend, a Haitian man who’s being called the Miami Zombie was shot dead by police after refusing to cease and desist eating the face of his 65-year-old homeless victim. Police had arrived at the end of a nearly 20-minute public assault under bright Florida sunshine during which the perpetrator, Rudy Eugene, was able to gnaw away at an estimated three-quarters of Ronald Poppo’s face. (If you don’t want to see what that looks like, don’t say you haven’t been warned.) In what is easily the most unfortunate use of the verb “to face” in world history, one news report says that Poppo “faces months, if not years, of recovery.”

With zero evidence (blood tests reportedly will take weeks to process), Eugene’s attack was blamed on illicit ingestion of mind-altering bath salts. His girlfriend, who declined to be identified, speculates that he fell victim to a voodoo curse. “He was a good kid,” said his mother, begging to differ. “He was no zombie.”

“While the apocalypse may not have arrived quite yet, there are plenty of zombies waiting for it to happen.”

In homage, a Brooklyn restaurant briefly offered a special open-faced sandwich and a Miami sightseeing tour has added the attack site to its itinerary.

An icy Canadian space fag named Luka Rocco Magnotta is now believed to be on the lam in Europe after allegedly murdering, dismembering, and eating his gay lover while filming it all and then posting it online. Magnotta had gained notoriety months ago for posting a video showing a python killing and consuming a kitten. “I’ll be back”and this time the victims won’t be animals,” Magnotta is suspected to have warned London’s Sun newspaper via email. “Once you kill, and taste blood, it’s impossible to stop.”

In Baltimore last week, 21-year-old Alexander Kinyua”out on bail from an earlier incident in May where he allegedly cracked someone in the skull with a baseball bat and blinded them in one eye”reportedly confessed to police that not only had he murdered his roommate, he also ate part of his victim’s brain and heart. Kinyua once hosted a podcast he called Warrior Syndicate Radio and posed in war paint for a promotional photo. His Facebook page contains a creepily prescient poll from May 17 where the most popular answer to his inquiry about the best “METHODS TO COUNTER THE DESTRUCTION…OF THE BLACK FAMILY” was “STOP EATING PEOPLE BRO.”

Although he technically didn’t eat any human flesh, a New Jersey man who looks almost exactly like comedian Dave Chappelle added an extra splash of gruesomeness after reportedly stabbing himself dozens of times and hurling scraps of his bloody intestines at a SWAT team that was trying to arrest him.