The Underbelly of Disbelief 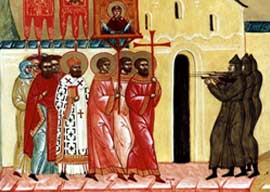 What is thought to be the first public monument to atheism in the United States was unveiled Saturday in the hardscrabble, Bible-believin” town of Starke, FL. A 1,500-pound granite bench etched with pro-atheist and anti-biblical quotations, it sits within spitting distance of another monument upon which is engraved the Ten Commandments. It is this antagonistic proximity to a biblical memorial that suggests the atheist shrine is intended to taunt others in a manner that reflects a Westboro Baptist Church level of gleeful assholery.

After the dedication ceremony, David Silverman, president of American Atheists, described the unholy bench as “an attack on Christian privilege“ and said that an anonymous donor had bequeathed a half-million dollars to construct up to 50 such memorials across the USA.

“I think we can look around and see that these atheists made a lot of noise,” gloated EllenBeth Wachs, founder of Atheists & Humanists of Florida, regarding the small crowd of disbelievers who”d gathered to celebrate the three-quarter-ton tribute to nothingness.

“It is becoming difficult to distinguish the True Believers from the True Disbelievers.”

Unless you”re deaf, you”re probably well aware that atheists have been making a lot of noise of late.

Take, for example, this screaming hyperactive barefoot gay atheist Jew who nearly gives himself a stroke as he harangues a calm and genial Christian on Sproul Plaza at the University of Berkeley. For nine minutes he foams and flails, saying “dirty Goyim” are responsible for slavery, homophobia, anti-Semitism, misogyny, and war crimes and thus should be imprisoned for their collective generational wickedness. He claims to be from the South, but despite his anti-Christian and anti-Southern animus, his fevered gesticulations are nearly indistinguishable from that of a deranged, snake-bitten Bible Belt preacher from the Alabama hills. Despite his hysterically avowed atheism, he has the moral certitude of a religious fanatic and seems convinced that anyone who even calmly disagrees with him is not only wrong”they”re evil.

As government and popular culture continue to dismantle organized religion’s influence on American life, a new breed of emboldened atheists is emerging, one that ironically seems every bit as militant, evangelical, hostile, and ideologically rigid as the religionists whose hatred they hate so fervently. As the movement gains power and rises in the social pecking order, it becomes more dogmatic and more eager to forbid and punish words and actions that obstruct its path. Rather than representing a passive lack of belief, this virulent sub-sect of modern atheism in many ways represents an aggressive belief system, an increasingly intolerant secular religion. It is becoming difficult to distinguish the True Believers from the True Disbelievers.

I”m not talking about all atheists, mind you”only the pushy and hateful ones. Not all Christians are pushy and hateful, either, but you wouldn”t know that by listening to some of this new herpetic breed of in-your-face deity-deniers.

What I find most loathsome about them”besides their personalities and, in extreme cases, their personal hygiene”is that despite all their chest-thumping about being rational skeptics, rare is the neo-atheist who dares question one pubic hair upon the corpus of our dominant cultural dogma, AKA the Cult of Equality. Almost down to the very last soulless soul, every one of these alleged “skeptics” gullibly gulps down every dumb, implausible, impossible, and unscientific tenet of liberal creationism. There is nothing remotely reasonable about blank-slate equality, but they treat anyone who dares challenge it as a heretic.

Even as they push for legislation that forces Christian bakers to squirt frosting atop same-sex wedding cakes and for Catholic healthcare agencies to provide birth control, they staunchly deny there is anything coercive, aggressive, overbearing, militant, or evangelical about their stance. As they preach it, religion en toto is an oppressively violent belief system, and once humanity is freed from religion’s shackles, we will have evolved together under one big shiny bubble of state-sponsored social harmony and borderless tranquility. They say that unlike Christians and Muslims, atheists don”t force their beliefs on anyone, that atheists don”t harm anyone. Look at history, they say.