The Unfortunately Innate Nature of Intelligence 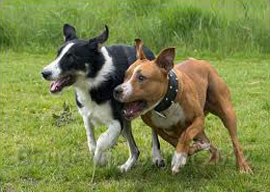 A Border Collie and a pit bull

Human races are subspecies of Homo sapiens [sic], just as Basset Hounds and Chihuahuas are subspecies of dog. The breeds of neither are precise genetic categories: In the words of the heroic John Derbyshire, genetically “what you see is a continuum with some pretty sharp clines.” Yet the genetic commonalities are sufficient to be obvious: At a glance one can distinguish between a Japanese and a Norwegian, or a Siberian wolfhound and a dachshund.

Anyone having experience with dogs knows that these admirable creatures differ in intelligence. Border Collies are simply smarter than pit bulls. Since there is no political penalty for noticing this, it is widely noticed and not disputed. Yet if subspecies of Bowser differ markedly in intelligence, it would seem to follow that subspecies of humans, who differ in color, hair, biochemistry, facial features, brain size, and so on, might also differ in intelligence. That is, there is no prima facie biological reason for believing that they cannot. There are many political incentives.

People who do not want to believe that such differences exist offer several curious arguments. One is to point out that humans and chimpanzees share 98.2% of their DNA. It then follows that different subspecies of humans share an even higher percentage of their DNA. This is intended to show that humans are therefore essentially identical and that no differences in intellect can exist.

The obvious reason for the similarity of DNA is that the two share their underlying design: digestive tracts, lungs, muscles, cells, and so on. On similar grounds one could note that a Lamborghini and a dump truck share underlying design and therefore are essentially identical. Wanna race?

But of course what the shared-DNA observation shows is the contrary of what it is said to show. It demonstrates that very small differences in DNA can produce profoundly different results. It means that a variation of 1.8% causes the difference between Wongobongo the Chimp and Marilyn Monroe. Your dating preferences are your own, but I am not sure the two are quite interchangeable.

For that matter, the genetic difference between men and women as a percentage is very small. Yet the observant reader will have noticed that this minute difference produces rather impressive differences of structure, thank God, as well as profound biochemical and functional differences. For example, men do not have uteruses, except perhaps in university faculty lounges.

In short, the notion that small differences in DNA cannot have massive effects is observably wrong.

Here we should note the dual modes of viewing intelligence, specifically Normal Mode and Racial Mode.

In Normal Mode, we all know what we mean by intelligence, and we all recognize that people vary greatly in how much of it they have. If John could read classical Greek at age three and graduated in mathematics from CalTech at fifteen, we would all agree that he was bright. If I said at a cocktail party, “Whoa! That gal Therese is smarter than five whips wired in parallel. Anybody got her phone number?” no one would tell me that I was a bigot or that Therese had exactly the same intelligence as everyone else. Rather they would say that I just knew a good thing when I saw it.