The Unraveling of Sykes-Picot 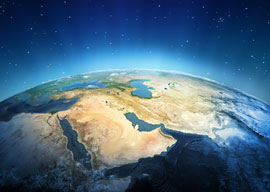 The thrice-promised land it has been called.

It is that land north of Mecca and Medina and south of Anatolia, between the Mediterranean Sea and the Persian Gulf.

In 1915—that year of Gallipoli, which forced the resignation of First Lord of the Admiralty Winston Churchill—Britain, to win Arab support for its war against the Ottoman Turks, committed, in the McMahon Agreement, to the independence of these lands under Arab rule.

It was for this that Lawrence of Arabia and the Arabs fought.

In November 1917, however, one month before Gen. Allenby led his army into Jerusalem, Lord Balfour, in a letter to Baron Rothschild, declared that His Majesty’s government now looked with favor upon the creation on these same lands of a national homeland for the Jewish people.

“At worst, we could get a privileged sanctuary for that al-Qaida affiliate, the Al-Nusra Front.”

Between these clashing commitments there had been struck in 1916 a secret deal between Britain’s Mark Sykes and France’s Francois Georges-Picot. With the silent approval of czarist Russia, which had been promised Istanbul, these lands were subdivided and placed under British and French rule.

France got Syria and Lebanon. Britain took Transjordan, Palestine and Iraq, and carved out Kuwait.

Vladimir Lenin discovered the Sykes-Picot treaty in the czar’s archives and published it, so the world might see what the Great War was truly all about. Sykes-Picot proved impossible to reconcile with Woodrow Wilson’s declaration that he and the allies—the British, French, Italian, Russian and Japanese empires—were all fighting “to make the world safe for democracy.”

Wilson’s idealistic Fourteen Points, announced early in 1918, were crafted to recapture the moral high ground. Yet it was out of the implementation of Sykes-Picot that so much Arab hostility and hatred would come—and from which today’s Middle East emerged.

Nine decades on, the Sykes-Picot map of the Middle East seems about to undergo revision, and a new map, its borders drawn in blood, emerge, along the lines of what H.G. Wells called the “natural borders” of mankind.

“There is a natural and necessary political map of the world,” Wells wrote, “which transcends” these artificial states, and this natural map of mankind would see nations established on the basis of language, culture, creed, race and tribe. The natural map of the Middle East has begun to assert itself.

Syria is disintegrating, with Alawite Shia fighting Sunni, Christians siding with Damascus, Druze divided, and Kurds looking to break free and unite with their kinfolk in Turkey, Iraq and Iran. Their dream: a Kurdistani nation rooted in a common ethnic identity.

Shia Hezbollah controls the south of Lebanon, and with Shia Iran is supporting the Shia-led army and regime of Bashar Assad.

Together, they are carving out a sub-nation from Damascus to Homs to the Mediterranean. The east and north of Syria could be lost to the Sunni rebels and the Al-Nusra Front, an ally of al-Qaida.