The U.S. of Shame 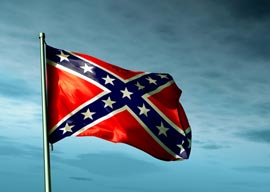 The American flag is a symbol of Native American genocide. We need to take it down. While you”re at it, take down the Union Jack. It symbolizes 700 years of war against Scotland. The Kiss logo has an SS that looks like Hitler’s SS. That’s offensive to all the Holocaust survivors in the audience. The Young Turks is offensive to the 1.5 Armenian Christians they murdered. They need to #ChangeTheName. I”m offended when rednecks call themselves rednecks because the term comes from Scotch-Irish slaves who couldn”t handle the Southern heat. That word should be as illegal as “kaffir” is in South Africa. White people themselves are a symbol of hatred and oppression, which is why I”ve begun a social media campaign called #TakeUsDown where white people post pictures of themselves facedown on the pavement. Anything that anyone deems offensive should be taken down immediately. Except, of course, for depictions of Mao or Stalin. They may have collectively killed more than 100 million people, but they did it for the greater good so it’s cool. Also, if a massacre killed rich people, it’s funny.

Just kidding. Going back over history and taking out the naughty bits is about as un-American as it gets. Yet here we are. South Carolina may be taking down the Confederate flag from its “perch in front of the State House” at the end of the month. Alabama removed the Confederate flag from capitol grounds on Wednesday. Mississippi is talking about removing the Confederate emblem from its flag, while Virginia and Maryland will be taking it off their license plates. Apple is removing App Store games with the Confederate flag. Walmart, eBay, Sears, Target, Etsy, and Amazon have banned it too (rumor has it Amazon was instructed by the government to do so). All this because a lunatic shot up a church.

“Going back over history and taking out the naughty bits is about as un-American as it gets. Yet here we are.”

A common refrain during all this controversy is that it’s no big deal and nobody’s banning the flag, they just want it relegated to museums where it won”t hurt anybody’s feelings. They said the same thing about Pamela Geller. Why bother having an art contest if it’s going to make people mad? Well, because capitulating to the perpetually offended is a thankless task that never ends. Did Veruca Salt cheer up when she finally got a ticket to Willy Wonka’s factory tour? No, she kept bitching until she ended up in the garbage. We”re heading to the same place.

Black people in America are far from spoiled English girls, but the culture of shame has the same effect no matter who it touches. Capitulation leads to more capitulation until you simply cease to be. I”m a Canadian immigrant hailing from a province that made the English language illegal. French Canadians claim we treated them like the “white niggers of America” so we lay down and let them enforce French from coast to coast. The English made Montreal into one of the strongest cities in the world, but that all changed in 1970 when French terrorists drove the country into a state of emergency. Today, Montreal is an economic dead zone where the few English who didn”t leave have sequestered themselves to the West Island, sorry, “l’Ouest de l’Ã®le.”

Coming at this from an outsider’s perspective and without hundreds of years of shame to cloud my judgment, the whole thing looks ridiculous. History is written by the victors, and they tell me the Civil War was all about the racist South refusing to abolish slavery. I”m sure this has some truth to it, but it appears that the South just didn”t like being told what to do. I think Lincoln made the war about slavery as a PR stunt and it was really about secession. This act of treason was something many states tried to do. Today, about a third of Texans feel they should have the right to secede. Making the entire four years that killed 620,000 men all about slavery is like saying the 37 million people who died in WWI did so for Archduke Franz Ferdinand. 620,000 is about how many Americans died in all other wars combined. With today’s American population it would be like losing 6 million. In that sense, it’s an American Holocaust. I thought it was verboten to forget those. Soldiers don”t die for ideology. They die for their brothers. I don”t know where liberals get this idea that every private gets to have a brandy with his superiors and discuss the finer points of the war. You go over the hill with your fellow soldiers because you don”t want them to go it alone. That’s not about slavery. As an immigrant, that flag is a symbol of hundreds of thousands of men who died in the most devastating war in America’s history. To remove it from view is to denigrate those soldiers. Sure, racists and lunatics might like it. So what? All cats are mammals. All dogs are mammals. All cats are not dogs.

In upstate New York, the flag seems to mean “redneck.” They wear it on their clothes to say they are proud to be working-class and they ain”t got much time for city folk (which sounds weird because they all have that New York accent). Basically, it means “Fuck Manhattan.” When I was shopping for PVC pipe at a Home Depot up there last week, an old lady asked me what it was for. I explained that I was making a potato cannon and that confused her more. I said, “It’s a redneck gun,” and she replied, “Ooh, well, I”m probably a redneck so I ought to have heard of it.”