The Value of the Guiding Hand 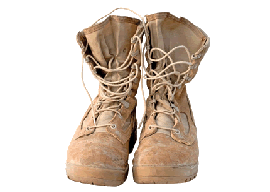 Leaning over the bar in London’s Union Jack Club drinking rum, I stood on legs of flesh and bone. The soldier next to me stood on legs of plastic and metal. He”d lost three limbs after being blown up in Afghanistan and only his left arm remained. The epitome of soldiering, he faced adversity with humor, telling me he could still hold a pint.

One of his legs cost thirty thousand English pounds. You can get a house for a third of that in Burnley. On leaving the service he says he wants to mentor young kids, and the government agrees with him. They want more soldiers in the classroom to straighten out our kids. Military to Mentors is halfway through a program that saw a hundred former soldiers retrained and sent into schools, and now they”re looking for more.

After leaving the service I mentored young Muslim kids, helping them see opportunities they had in this country and why it wasn”t wrong for them to don a uniform to defend it. I was part of a program to help prevent violent extremism. Mentoring is like therapy: unquantifiable sometimes, but we know it works.

“Mentoring is like therapy: unquantifiable sometimes, but we know it works.”

It reminded me of “M,” my first mentor. M now holds a senior position in government and would appreciate the anonymity. I never thought about him as a mentor, but every so often through my life I could feel his influence. It all started when I joined the Air Cadets in Burnley where we met. It was the start of my military career.

I was sixteen and living on a street that had a mosque at one end, a school full of Asian kids at the other, and in between were rows of terraced houses full of arranged marriages. A few blocks had been converted into shops. One sold Halal meat, another jewelry, another Indian clothes. Rather, I should say “Pakistani” clothes; the Pakistanis don”t like being reminded that they used to be Indians. There was also an accountant’s office that sold plane tickets to Islamabad or Mecca, changed currency, provided Internet, sold phone cards, and became the Labour party office at election time. Little Pakistan.

Friends and family told me I was a future doctor who”d marry his cousin. M was having none of this. For me he didn”t see Burnley, he saw the world. He saw a future soldier. I can”t thank him enough for his guidance, and I daresay these words would embarrass him. M was as quintessentially British as it gets. Nobody actually needed a pocket watch on a chain in 1995. M made me soldier on nights when I was meant to be learning about benzene or how mitochondria worked.