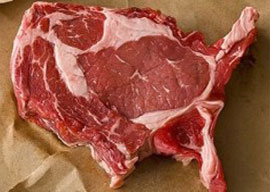 I have trouble accepting the idea that Hitler was a vegetarian. He just didn”t seem that pushy.

Apparently others feel the same way. When I started typing “pushy vegetarians” on Google, it auto-filled the rest after “pushy v”.”

Is there a chemical in bean sprouts that causes self-righteousness, or perhaps an enzyme in beef that minimizes sanctimony? If you are what you eat, radical vegetarians must be eating something very unpleasant. They bare their tempeh-nibbling fangs to reveal the rabid hostility that always seems to be a hallmark of those who feel compelled to make a grand public display of their “compassion.” But hilariously, a recent study suggests that “exposure to organic foods” leads people to be less altruistic.

The mouthier vegetarians I”ve known seem to respect all life forms except for those that happen to be in the room with them at any given time. Because they are opposed to animal suffering, they apparently feel entitled to make every human being around them suffer. It reminds me of an exchange between George and Jerry on Seinfeld:

GEORGE: I can sense the slightest human suffering.
JERRY: Are you sensing anything right now?

If God didn”t want us to eat meat, you”d think he would have made tofu taste better. But I”m not even suggesting that red meat is healthy or that all vegetarian diets are unhealthy. I don”t possess adequate nutritional knowledge to act like a True Believer either way. This isn”t about health, it’s about a certain personality type. There’s a huge difference between eating vegetarian and acting vegetarian.

I realize all vegetarians don”t act that way. But a repellent minority insists on yelling so loudly, you can”t hear what the other ones are saying.

So I”ll respectfully spare those who keep their precious food choices to themselves. I”ll focus on the more radical factions such as vegans”i.e., those who eschew all animal products including dairy”as well as the more extreme fringes such as fruitarians and, way out near Pluto, the breatharians. Far more than simple vegetarianism, veganism seems rooted less in genuine health concerns than in lunatic apparitions such as “animal justice.”

It’s not like such extreme beliefs are sometimes used as a pretense to commit bombings or arson. It’s not as if nutritionally psychotic parents have passively allowed their children to die in Georgia, Florida, France, England, or New Zealand.

It’s been suggested that a deficiency of Vitamin B-12, which is gapingly absent from the vegan diet, can lead to psychosis. There’s also a proposed eating disorder called orthorexia nervosa that attempts to explain obsessive fixations on dietary purity.

Still, I suspect there was something wrong with many of these people long before they stopped eating animal cadavers. They remind me of the compliant bottoms in what Erich Fromm described as the master/slave equation that forms the complete “Authoritarian Personality,” a “masochistic and submissive individual, who fears freedom and escapes into idolatry.”

Like all True Believers and Authoritarian Personalities, militant vegans adhere to some common CAUSE they deem far more important than their own lives”a noble and holy cause which, paradoxically, leads them to act highly ignoble and profane.