The Vicious Circle of Greek Politics 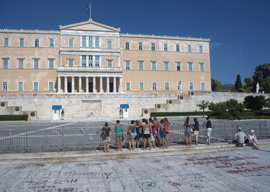 Most people in America don’t realize that Greece is a very new country—its independent-nation status was made official in 1830. Greece is as old as Belgium but far more poor. Even Dubya as president did not know our name. He called us Grecians, like the hair dye, instead of Greeks.

We Hellenes are among the oldest civilizations, having invented or perfected such bagatelles as philosophy, science, medicine, astronomy, tragedy, epic poetry and literature, the arts, and classical architecture. We also invented the greatest system of government—selective democracy—based on good citizenship, knowledge, and responsibility.

But more than two thousand years since our peak, we Greeks are in deep trouble. After an Ottoman occupation of nearly 400 years that ended with a successful revolutionary war in 1827, the Greeks were as ready for democracy as, say, some African folk back in 1960. Civil disobedience and a deeply ingrained distrust of authority had been considered good for four centuries, but it suddenly was regarded as a crime. Few Greeks understood this. Democratic and liberal ideas had to be scrapped as the people’s newly found freedom turned into lawlessness. The vicious circle of freedom-anarchy-repression has marked modern Greek life up to the present day. Take, for example, taxes. Unlike American WASPS, Greeks do not consider taxes to be a civic duty and mostly refuse to pay them. Politicians choose to ignore this rather important defect, because they in turn get rich in office through bribes and kickbacks.

“The unelected EU found a way to rule Europe—something Napoleon and Hitler failed to achieve.”

Greek intellectuals and historians have generally blamed the 400-year Turkish occupation for the nation’s ills. It is a fact that, where humiliation persists through several generations, the oppressed begin—in defense of their own dignity—to imitate their oppressors. The cruelty, vindictiveness, and harshness shown by warring political factions testify to this theory. But this is not a sufficient explanation. The volatility of the Greek character, probably the only remaining link with our glorious past of antiquity, is another. The highly individualistic Greek is too self-seeking to submit easily to others’ dictates. His unruliness has helped him survive through the centuries of oppression, as well as to rise above adversity. But it has also made him unaware of the advantages of a communal spirit and true democratic attitudes. This has created a climate where cheating is a way of life, where the highest and lowest of citizens do not hesitate to use dishonesty, especially in politics.